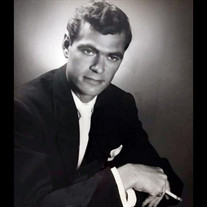 Alan Keith Urschel was born in Urbana, Indiana on June 2nd, 1930 to Orville and Thelma Urschel. He passed away at Park Meadows Assisted Living in Overland Park, Kansas. Alan had a younger brother, Larry, and sister, Sue. He grew up on the farm and before he could go to school he was milking cows. He grew up camping and coon hunting and getting into trouble with his younger brother Larry and two cousins, Bobby and Harold Christie. In high school, he was on the varsity basketball team, and had a fascination with radio. He built his own radio when he was 13 years old. Growing up, he was a member of the Evangelical Church in Urbana. He was also a softball pitcher during his high school years and a crooner. He took voice and dance lessons and sang as a front man in the stylings of The Ink Spots, Frank Sinatra and Nat King Cole. He eventually sang on stage and radio in Chicago, IL where he competed with Andy Williams and sang minstrel choir with his father Orville and his Uncle James Urschel as well. In 1949, he joined the Army and was a member of the 101st Airborne, completing basic training at Camp Breckinridge in Ft. Campbell, Kentucky. In addition to Camp Brekenridge, he attended training in Fort Hood, TX, where he was trained in marksmanship and as a radio operator in the 1st Calvary. He was stationed overseas in Korea and was involved in many campaigns including the Battle of Chiyong-Ni. It was during this engagement and another that he was combat wounded on two occasions. He was awarded two Purple Heart Medals for his service, as well as medals for meritorious service and marksmanship. It was on the battlefield that Alan committed his life to Christ being inspired by the nurses of the Salvation Army. Upon returning from the war, he attended Valparaiso Tech in Indiana and received his technical degree in radio operations and communications. Alan was a driven young man and landed his first job with Philco and began his career as a microwave engineer where he was responsible for microwave station and antenna install and operations across the country, state to state. While he was doing work in Beatrice, Nebraska with his friend and co-worker Perry Deaton, he met his future bride and wife of 47 years, Ethel Kiester. Ethel was a Geneva girl who was teaching elementary school in Beatrice at the time with her good friend and co-worker Joann. Alan, Perry, Ethel & Joann all decided to go on a date together, Alan & Joann together and Perry & Ethel together. While on the date, Perry & Ethel danced and then Ethel and Alan danced. Ethel retold the story that Alan sang into her ear while they danced and sounded like Nat King Cole and that was it. Six weeks later on November 15, 1953, Alan and Ethel were married in the United Methodist Church in Geneva. On August 2, 1954, their first child, Kimberlee Paige, was born. Alan, Ethel and Kim travelled extensively from state to state eventually settling in Dallas, Texas. Alan worked with Collins Radio as a Communications Engineer for the next 13 years. During this time their second child, Scott Alan, was born in 1957. Seven years later their third child, Robert Harding, was born in 1964. In 1970, Alan and family moved to Palo Alto California where he was employed as a marketing sales executive in San Francisco. At this time, Alan discovered he had a passion for sailing. He was a member of the Palo Alto Yacht Club and he and daughter Kimberlee sailed competitively in the San Francisco Bay. Two years later, Alan was offered an opportunity as a Vice President of the Midwest Region for Southern Telephone Supply in Lincoln Nebraska and the family moved back to Ethel’s family home in Geneva, Nebraska. In 1979 he was appointed President of Southern Telephone Supply. He ended his career as President of Alltel Supply, which is now part of Verizon Wireless. Alan was passionate and driven to succeed whether it was coaching his son Scott to a basketball tournament championship while in Dallas or the Geneva girl’s softball team. He had a passion for painting and makingwine. His greatest passion was realized in later years and that was a passion for Christ, particularly, sharing that passion with others. Alan was preceded in death by his parents Orville and Thelma; and his beloved wife Ethel (Kiester). He is survived by his children, Kimberlee & John Hixon, Scott & Marilyn Urschel and Robert Urschel all of Overland Park, Kansas; grandchildren, Nathaniel Alan Hixon, Benjamin Scott Urschel, Samuel James Urschel, Kelly Cole Urschel, Molly Elizabeth Urschel and Lauren Belle Urschel; brother Larry Urschel of Wabash, Indiana who passed away 3 days after Alan; and sister Susan and Dean Wilhelm of Roann, Indiana. A Funeral Service for Alan was held on Friday, February 23, 2018 at 10:00 a.m. at the United Methodist Church in Geneva. Pastor Michelle Gowin officiated the service. Nathaniel Hixon provided the prelude and postlude music. He also accompanied Lauren & Kelly Urschel in the singing of “Flight,” “I See The Lord” and “I Get A Kick Out Of You.” Pallbearers for the service included Todd Dinslage, Mark O’Brien, Lance Fiala, Jon Miller, Rod Norrie, and Bill Biegert. Honorary Pall Bearer was Bill Lauber. A Graveside Service was held in the Geneva Public Cemetery with Military Rites performed by Geneva VFW Post 7102 and the Nebraska Military Honor Guard. Farmer & Son Funeral Home conducted the Funeral arrangements and online condolences can be left at www.farmerandsonfuneralhome.com Memorials are suggested to the Fillmore County Legion Riders and the Salvation Army.

Alan Keith Urschel was born in Urbana, Indiana on June 2nd, 1930 to Orville and Thelma Urschel. He passed away at Park Meadows Assisted Living in Overland Park, Kansas. Alan had a younger brother, Larry, and sister, Sue. He grew up on... View Obituary & Service Information

The family of Alan K. Urschel created this Life Tributes page to make it easy to share your memories.

Send flowers to the Urschel family.