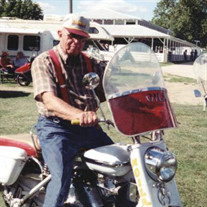 A Memorial Mass for Albert will be held on Monday, January 26, 2015 at 11:00 a.m. at the St. Stephen's Catholic Church in Exeter. Interment of cremains will follow the Mass in the Exeter Cemetery with Military Rites performed by the Exeter American Legion William Sullivan Post 218. A Rosary will be held on Sunday at 7:00 p.m. at the St. Stephen's Catholic Church. Memorials are directed to the Exeter American Legion or the Exeter Cemetery. Albert Asa Kaiser was born on February 9, 1929 at Dr Stratton’s Doctor office in Exeter, NE and lovingly welcomed into the Albert and Anna Marie (Becker) Kaiser home as their own. Albert was officially adopted in 1930. Albert was a lifetime native of Exeter, growing up on the family farm north of Exeter. He attended rural school at Dist 24 in Fillmore County. He was a lifetime member of St. Stephens Catholic Church where he was baptized and confirmed. Albert passed away surrounded by family at the Exeter Care Center on January 19, 2015 Albert worked for Ervin Volkmer on a combining crew traveling throughout Nebraska, Kansas, and Oklahoma harvesting crops from the fields. Albert joined the Armed forces in 1950 serving with the Army. He was stationed at Fort Riley, KS until going to Korea where he served with the 31st Engineer Battalion 15th Infantry Division Service Company. Albert re-enlisted and served his country until 1953. Albert married Loyola Jane (Becker) Votipka on August 16, 1956. He became a Step-Father to Carol Jane Votipka. Carol will tell you she had a Daddy but in Albert she had a Dad. To this Union, was born daughter Paula in 1959. Upon returning from the Service, Albert went to work for Bill Styskal at Styskal Well Drilling. After several years of working for Styskal Well Drilling, Albert took on the additional task of farming the family farm. Eventually making farming his career. Albert also started farming with Bill Styskal and his brother Fritz in a venture that continues to this day. Albert also started farming for the Schultz family based on a handshake. That honored handshake lasted for 40 years with Albert’s retirement at the age of 80. Albert, with his girls as helpers, worked the fields in the summer. Knowing what hot miserable work it was moving pipe, Albert would cool the girls off by tipping his end of the pipe higher emptying any remaining water out the other end, drenching who ever was at the low end. The girls quickly learned this was going to happen, they just never knew when. Albert always kept his fishing poles in the bed of his pickup just incase the water wasn't quite to the end of the row and not wanting to waste time doing nothing, he treated the girls to a little fishing while they waited or sometimes setting up target practice and teaching the girls to shoot. Albert and Jane became snowbirds, traveling to Texas in the winter months. Wintering in Texas was something Albert looked forward to, and he was always happy when someone from Exeter would want to come to visit their piece of paradise on earth. Albert also enjoyed restoring antique tractors. His biggest love was restoring Cushmans. Amassing a collection that Jane was aware of and some that she didn't know he had. The pride of his collection was his Eagle and Silver Eagle scooters which he loved taking to surrounding towns to ride in parades or riding one around Exeter. He also was an avid fisherman and hunter. Albert started his search for his biological sister in 1963 with the few details he was given regarding being adopted. Finally, in 1998 he found his sister LaVonne in Denver Colorado. This caused Albert great joy. He and LaVonne met and became an instant family, building bonds that were never broken. Albert was a kind and honest man, quick with a smile and a friend to all. Always willing to help wherever and however he was needed. Albert did his best to live his life to the fullest and to enjoy every minute that he was given. He was preceded in death by his parents, Albert and Anna Marie Kaiser; parents-in-law Paul and Clara Becker; and Son in Law Donald Harris. Albert leaves behind his wife, Jane, of 58 years; daughters Paula Kaiser-Asmus and son-in-law Randy of Lincoln, NE, Carol Votipka Harris of Concord NC; sister LaVonne Vitello of Denver, CO; brother-in-law Paul and Irma Becker of Lincoln, NE; and sister-in-law Alice Folkers of Lincoln, NE. He was blessed with 4 Grandchildren: Claire, Matthew, Chris, and Kari and 5 Great Grandchildren: Elizabeth Grace, Will, Billie Deana, Grant, and Mazzy Jane; many nieces and nephews; and step-son Jim and Judy Votipka of Geneva, NE.

A Memorial Mass for Albert will be held on Monday, January 26, 2015 at 11:00 a.m. at the St. Stephen's Catholic Church in Exeter. Interment of cremains will follow the Mass in the Exeter Cemetery with Military Rites performed by the Exeter... View Obituary & Service Information

The family of Albert A. Kaiser created this Life Tributes page to make it easy to share your memories.

A Memorial Mass for Albert will be held on Monday, January 26,...