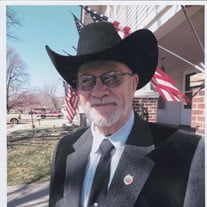 A Funeral Service for Al will be held on Thursday, December 14, 2017 at 2:00 p.m. at the First Congregational United Church of Christ in Geneva, Nebraska with Pastor Stuart Davis officiating. Visitation will be held on Wednesday, December 13, 2017 from 1:00 p.m. until 8:00 p.m. with the family greeting friends from 5:00 p.m. until 7:00 p.m. at Farmer & Son Funeral Home in Geneva. Graveside Services will be held on Friday, December 15, 2017 at 1:00 p.m. at Rose Hill Cemetery in Callaway, Nebraska. Memorials are to be directed to the family for a later designation. Albert Allen Wise Albert “Bud” Wise, born April 7, 1943, entered into his eternal rest December 8, 2017 following a short battle with cancer. Al was born in Evanston, Wyoming to Ralph and Irene (Rhoads) Wise. He was a graduate of Callaway High School, class of 1961. Al was married on June 23, 1962 to Paulette G’Schwind. Albert is survived by his loving wife of 55 years Paulette, his daughter Tina Marie (Scott) Schmidt of Cozad, NE and his son Shane Allen (AnnMarie) Wise of Tacoma, WA. His grandchildren: Samantha (John) Powe of Tyler, TX, Caitlin (John) Dembowski of Denver, Co, Jennifer Schmidt of Holdridge, NE, Amanda Marie (Cory) Stedman of Westport, WA, and Dakota Allen (Janelle) Wise of Tacoma, WA; his great-grand children: Odin Powe, Peter Dembowski, Liliana, Victoria and Donald Stedman, his mother Irene Wise and sister Janice Waltke, of Beatrice, NE his brother Charles (Becky) Wise of Omaha, NE, sister-in-law Collette (Brent) Bills of Lincoln, NE as well as many nieces, nephews, and cousins. He was preceded in death by his father Ralph J. Wise, and brother-in-law Willard Waltke, father-in-law Paul G’Schwind and mother-in-law Leona G’Schwind. Al worked as a track maintenance crew heavy equipment operator for the Union Pacific Railroad. In 1966, he became a Trooper for the Nebraska State Patrol, retiring after 25 years of service, including time as a Bomb Technician and as an Academy Instructor. After retiring from the State Patrol, he accepted appointment as the Chief of Police for Geneva, NE. He also worked with Ron and Alice Tatro in their farming operation. Additionally, he drove busses for Heartland Tours and for Fillmore Central School District. He worked for Schoenholz Realty and Auctions and Copper Key Realty and Auctions, and attended and graduated from the World Wide College of Auctioneering in Mason City, IA Having hailed from a railroading family, Bud enjoyed taking road trips to watch trains with Paulette at places like Gibbon, Alexandria, and Belvedere. He was an avid collector of model trains, and spent hours in his wood shop restoring antique furniture and creating, personalizing, and hand painting name trains. Al was a 40+ year member of Geneva Masonic Lodge #79, holding numerous positions at the local and state level. A great admirer of Ronald Regan, Gen. George S. Patton, and John Wayne, he was a sincerely patriotic man, proudly calling himself a “Flag-Waving American”. He was honored to have met 4 United States Presidents, Bob Hope and Johnny Cash. Living life to the fullest he enjoyed camping and fishing, road trips, extensive travel and visiting their children and families while they were stationed around the world with the U.S. Army. Albert was very social and loved to visit and was always ready with a story to tell.

The family of Albert Allen Wise created this Life Tributes page to make it easy to share your memories.

A Funeral Service for Al will be held on Thursday, December 14,...

Send flowers to the Wise family.