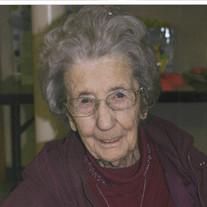 Alberta June (Schweitzer) Bruning was born near Carleton, to Lloyd and Katie (Springer) Schweitzer on June 23, 1922. As a young girl, she was raised near Carleton. She was the first born in the family. After spending the last 6 years of her life at Blue Valley Nursing Home in Hebron, she peacefully passed away on December 1, 2014 at the age of 92. Alberta attended country school through the eighth grade, at which time she helped out with the family. She also worked at London Hardware Store and J. C. Penney Store. Alberta’s sister Vera and her husband Reub Lichti lived in Bruning next door to Paul Bruning and his mother. Vera introduced Alberta to Paul, and they were married March 5, 1952. In September of 1954, Paul and Alberta welcomed their son, Douglas Paul. Paul and Alberta lived on the family farm until 1971, at which time they moved to Bruning. After Doug started school, Alberta was asked to come to work at the school as a cook. She was a school cook in Bruning for over 25 years. This gave her the opportunity to do what she loved-cook and bake. In 1969, she also began cleaning the bank in Bruning and continued to do this through all the additions and remodels. She always got worried when Frank walked through the bank with a yardstick, thinking he was going to do another remodel or addition-more dust to clean! Alberta attended Salem Mennonite Church growing up and joined the United Methodist Church in Bruning after her marriage. She was a member of Durham-Mammen Legion Auxiliary, Bruning United Methodist Women, VFW Auxiliary, Thayer County Historical Society and enjoyed playing cards with the Chit Chat Club in Bruning. Alberta enjoyed quilting with her friends-and especially making and enjoying lunch with the quilters. Both of her granddaughters were presented with quilts made by grandma for their wedding gift. Everyone in Bruning knew Alberta was a great cook-especially her “famous” doughnuts! She loved to bake and share what she had made, especially with the staff at the bank in Bruning. She also loved to entertain family and friends. Her granddaughters were her greatest joy. Michelle didn’t have an interest in grandma teaching her how to bake, but Maggie would put on her apron and help grandma make doughnuts, cakes, cookies, pies or whatever else she was making when she was visiting at grandmas. She also had the girls help her with her garden. Her garden harvest as always enough for her to can several jars of vegetables, especially dill pickles, with plenty left over to share. Alberta was preceded in death by her husband Paul of 44 years; sisters Bernetta Swartzendruber and Betty Kennel; brothers Everett Schweitzer and Edward Schweitzer; brothers-in-law Reuben Lichti, Virgil Swartzendruber, Donald Roth and Robert Kremer; and sister-in-law Marcia Schweitzer. She is survived by her son Doug and wife Janelle of Bruning; granddaughters Michelle (Jason) Paulk and Maggie (Justin) Jiskra, all of Lincoln. Great-granddaughters Emma June Jiskra, Caitlin Lucia Paulk and Skylar Quinn Paulk, all of Lincoln. Sisters Vera Lichti of Geneva, Marge Kremer of Omaha and Mary (Jerry) Stutzman of Phoenix, Arizona. Brothers Clint (Marilyn) Schweitzer of Geneva, Galen (Joan) Schweitzer of Lincoln, Nick (Kit) Schweitzer of Fort Wayne, Indiana, Ron (Judy) Schweitzer of Auburn, Indiana, and John (Diane) Schweitzer of Lincoln, nieces, nephews and many friends. Funeral services for Alberta will be 2:00 p.m. Friday, December 5, 2014, at the Trinity Lutheran Church in Bruning, Nebraska. Public visitation will begin Thursday at 1 pm until 8 pm with family greeting friends from 4 to 6 at the Farmer & Son Funeral Home in Geneva, Nebraska. Interment will be in the Bruning Public Cemetery. Memorials are directed to the Bruning Community Foundation, Bruning Public Library or the Blue Valley Lutheran Home Foundation.

Alberta June (Schweitzer) Bruning was born near Carleton, to Lloyd and Katie (Springer) Schweitzer on June 23, 1922. As a young girl, she was raised near Carleton. She was the first born in the family. After spending the last 6 years of... View Obituary & Service Information

The family of Alberta J. Bruning created this Life Tributes page to make it easy to share your memories.

Alberta June (Schweitzer) Bruning was born near Carleton, to...