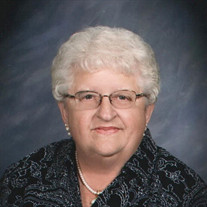 Mass of Christian Burial will take place on Tuesday, April 7, 2015 at 10:00 AM at St. Joseph's Catholic Church in Tobias, NE. Rosary will be held prior to the funeral mass on April 7th at St. Joseph's Catholic Church at 9:30 AM. Visitation will begin on Monday, April 6, 2015 at Farmer & Son Funeral Home in Geneva at 1:00 PM going until 8:00 PM. The family would like the memorials directed to Daykin Ambulance, Daykin Fire Department, Daykin Park or Daykin Library. Graveside services will be conducted at the Ohiowa Public Cemetery following the funeral mass in Tobias. Alda Mae (Wolfteich) Krejci was born May 7, 1936 on a farm northeast of Bruning, NE to George and Laura (Weber) Wolfteich. She passed away on April 4, 2015 at the age of 78 years 10 months and 28 days. She was the older of two children. Her only sibling was her younger brother, Bernard Lee. As a child she and her family moved to her grandparents, Fred and Anna Wolfteich’s farm, five miles south of Ohiowa, where she grew up. Alda Mae was baptized and confirmed at St John’s (now Grace) Lutheran Church south of Ohiowa. She attended country school District 76 and 83 her first years and then graduated in 1954 from Ohiowa High School. She was a member of St. John’s in Ohiowa from 1955 – 1958. Alda Mae married Edmund Krejci on April 26, 1958. They enjoyed almost 51 years of marriage until Ed’s death in 2009. Their first four and half years of marriage they lived in Beatrice where Ed was employed. While living in Beatrice they were blessed with two children, James William and Phyllis Ann. In April 1962 the family moved to Daykin, NE where they resided for many years. While in Daykin, Alda Mae worked at Miller’s Drugstore, the post office and for thirteen years she and Ed and her brother and sister-in-law owned Ideal Grocery, which she enjoyed. Later she cleaned the Daykin Bank and rented and cleaned the Daykin Community Center. She belonged to several clubs in Daykin; most memorable for her were the Community Club and the Library Board, which she was on for many years. Her and Ed were active at their church, St. Joseph’s Catholic in Tobias, NE. She was an active member of the PCCW (Parish Catholic Church Women) and was treasurer of that for many years. She was always willing to help anywhere she was needed in her church and community. Alda enjoyed her flowers, doing crafts and doing ceramics for 28 years. She made many ceramics for family and friends. She loved to have family dinners, making pies were her specialty. She collected angels and had many of them. Tragedy struck the family in June of 1968 when her daughter, Phyllis, and Alda’s mother were killed in a car accident. This left a deep scar on the family, never to heal. Alda was preceded in death by her husband, Edmund “Ed” in 2009; daughter, Phyllis in 1968; granddaughter, Jennifer Lynn in 1992; her parents, grandparents, her brother, Bernard in 2006 and her in-laws, Vadan and Clara Krejci; brother-in-law, Eugene Zordel and nephew, Mark Zordel. She is survived by her son and daughter-in-law, James “Jim” and Kristina Krejci; her dearly loved grandchildren, Mindy Leigh, Chloe Renae, Trevor Stephen and great-grandchild, Isaac Kenneth; sister-in-laws, Janet Wolfteich and Dorothy Zordel and nieces and nephews, great nieces and great nephews. She dearly loved all her family.

The family of Alda Mae Krejci created this Life Tributes page to make it easy to share your memories.

Mass of Christian Burial will take place on Tuesday, April 7,...