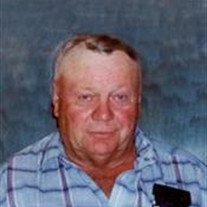 Alfred Charles Matejka was born to Charles Matejka and Anna Vavra Matejka on Oct. 9, 1923, at Milligan, Ne., and passed away June 26, 2013, at Ridgewood Care Center in Seward, Ne., at the age of 89 years, 8 months and 17 days. He was one of 5 children in the family. Alfred was born, raised and lived on the same farm Northeast of Milligan all his life except for the past 5 1/2 years. After graduating from Milligan High School in 1942 he started a lifetime career of farming the family farm. In 1984 Alfred was recipient of the Ak-Sar-Ben Pioneer Farm award given to families in Nebraska whose land has been owned by the same family 100 years or more. Alfred had a love for conversation and telling stories, especially topics such as family and community historic events, pioneer methods and life, and of course the "weather", a true farmer. Being a very kind and patient person he cared for his mother until she passed away in April 9, 1969. Alfred married Joy Weddle Eurich March 29, 1971. In the 36 years of marriage Alfred and Joy enjoyed gardening, polka and country music, traveling, family time, good food and most of all the company of each other. After Joy passed away Nov. 2007, Alfred moved to assisted care at the Greene House in Seward. Oct. 2013 he moved to Ridgewood Care Center as his health was declining. June 20, 2013 Alfred started receiving Hospice care. During this time he was baptized into the Catholic faith. To know Alfred was to know his humor and good nature. He always had a smile on his face and a good word until the very end of his life. When asked how he was doing, the answer always was "like an old man"! Never, it seemed did he tire of being outdoors with nature and traveling the countryside looking at crops and the land. Alfred was preceded in death by his parents, wife Joy, sisters Mollie Nun, Georgia Pracheil, Helene Romero, and Rose Matejka. Stepson John Eurich and Step - daughter Linda Hamelin He is survived by: nieces, Patricia & husband Robert Lee - Lincoln, NE. Mary & husband Harlan Mettenbrink - Wimberley, TX. Elaine & husband Merlyn Nielsen - Seward, Ne. and Maureen & Rodney Nielsen - Springfield, NE. Step - daughter Janet Hansen & companion Arthur C. Holdaway Jr. - Fallston, MD. and Step-son Larry Eurich & wife Linda - Bellevue, NE. and many nieces, nephews, and step grand children. Funeral services were conducted from the St. Wenceslaus Catholic Church in Milligan, Nebraska on Monday, July 1, 2013, with Father David Bourek officiating. Karen Filipi accompanied the congregation who sang Blest Are They, Be Not Afraid, O Lord I Am Not Worthy and Holy God We Praise Thy Name. Casket bearers were Mark Vavra, Edwin Vavra, Stuart Vavra, Dan Hansen, Lucas Eurich and Adam Eurich. Honorary bearers were Melvin Vavra and Marvin Gooding. Interment was in the Cesky Bratri North Cemetery with Farmer & Son Funeral Home in charge of the arrangements. Memorials are directed to the family for later designation. Funeral Mass for Alfred will be 10:30 a.m. Monday, July 1, 2013 at the St. Wenceslaus Catholic Church in Milligan, Nebraska. Rosary will be at 10:00 a.m. on Monday prior to the Funeral Mass. Visitation will begin Sunday at 2:00 p.m. until 8:00 p.m. with family greeting friends from 2 to 4 at the Farmer & Son Funeral Home - Kotas Chapel in Milligan. Memorials are directed to the family for later designation.

The family of Alfred C. Matejka created this Life Tributes page to make it easy to share your memories.

Send flowers to the Matejka family.