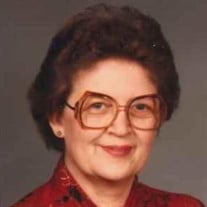 A Memorial Service for Alice will be held on Tuesday, June 8, 2021 at 11:00 a.m. at the United Methodist Church in Geneva, Nebraska with Pastor Doug Griger and Kim Dunker presiding. No Visitation - Cremation. A Private Family Inurnment will be held prior to the memorial service in the Geneva Public Cemetery. Memorials are to be directed to the family to be designated at a later date. A Livestream Video of the memorial service will begin at 11:00 a.m. on Tuesday, June 8, 2021. To view the Livestream Video you can go to Farmer & Son Funeral Home's Facebook Page or in your search engine type @friendlyfuneraldirectors and click the link to Farmer & Son or click this link https://www.facebook.com/friendlyfuneraldirectors/Funeral and it should direct you to our Facebook Page. Alice Ann (Lanham) Lux was born October 18, 1927 in Stromsburg, Nebraska to Harry and Juanita (Carlson) Lanham. Alice had a younger sister and brother, Joan Beth and Robert. Alice passed away June 3, 2021 in Geneva, Nebraska at the age of 93, seven months and 16 days. Alice spent her youth in Stromsburg attending Stromsburg Schools. She attended four different high schools due to the family moving for her father’s occupation. She graduated from Golden High School, Golden, Colorado in the class of 1945. After graduation, she attended Denver University and the University of Nebraska majoring in art. It was in Lincoln, Nebraska that she met and married her spouse, Arthur Lux on October 4, 1947. Alice and Art celebrated 71 years of marriage prior to Art's death. To this union was born three children, Laurie (Clint) Kimbrough, Mary (Rodger) Stofer, and Jeff (Sarah) Lux. The family resided in Lincoln, Nebraska until October, 1960 when Art and Alice purchased Hiway Lanes in Geneva, Nebraska. They also lived in Orange, California for a few years before eventually retiring back in Geneva. Alice was a bookkeeper for various companies throughout her life, as well as owning a fabric store for a short time. Alice's family was close to her heart and she enjoyed and loved each and every one of them. She looked forward to their visits and hearing about their activities. She also enjoyed a wide circle of friends, where she was known for her humor and wit. Playing bridge, meeting with her coffee group, and the famous girls' road trips provided much fun and many colorful stories. Alice had an eclectic range of creative interests such as quilting and decorating her home, but her true passion was art. She was a member of the Geneva Art Association, Association of Nebraska Art Clubs, and Geneva Quilt Guild, winning numerous honors on her works. Additionally, Alice was a member of Pi Beta Phi, PEO, United Methodist Church and Church circle. Preceding Alice in death were her husband, Arthur; her parents, sister, brother, and great granddaughter, Mira McKnight. Surviving Alice are her children Laurie (Clint) Kimbrough, Mary (Rodger) Stofer, Jeff (Sarah) Lux, seven grandchildren, eighteen great grandchildren, and one great great grandson.

A Memorial Service for Alice will be held on Tuesday, June 8, 2021 at 11:00 a.m. at the United Methodist Church in Geneva, Nebraska with Pastor Doug Griger and Kim Dunker presiding. No Visitation - Cremation. A Private Family Inurnment will... View Obituary & Service Information

The family of Alice A. Lux created this Life Tributes page to make it easy to share your memories.

A Memorial Service for Alice will be held on Tuesday, June 8,...

Send flowers to the Lux family.