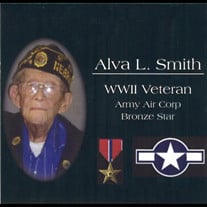 Alva Logan Smith was born in West Blue Township near Exeter, Nebraska to Arthur & Iva (Mitchell) Smith on April 1, 1920 and passed away at the Mahoney House in York, Nebraska at the age of 97 years, 6 months, and 13 days. He was one of two children born in the family Alva attended grade school at Rural School District #14 and graduated from Exeter High School with the class of 1938. He farmed near Exeter before entering the service. He was drafted on March 5, 1942 and served in the Army Air Force in the European Theatre of Operations as a B-26 Marauder Crew Chief. He was awarded the Distinguished Unit Citation, Good Conduct Medal, and the Bronze Star for maintaining 139+ missions without any airplanes returning for mechanical difficulties. He was honorably discharged October 25, 1945. Alva was a patriotic man and was very proud of his service to his country. He was a member of Geneva VFW Post 7102 and the Exeter American Legion William Sullivan Post 218 for 73 years. After returning home from the service. Alva worked many different jobs. He was a truck driver, sheep shearer, local veterinarian, farm hand to many, mechanic and simply a jack of all trades. Alva married Joan Roeber on October 10, 1976 at Tacoma, Washington. They shared 25 years of marriage until Joan’s death in October of 2001. They worked and split time in both Exeter, Nebraska and Puyallup, Washington. Alva loved to visit and share stories of his life experiences with the people of Exeter and surrounding communities. It was enjoyable and easy to listen to him talk of old times from the area. Working for friends gave Alva purpose and allowed him to put his driving and mechanical skills to use. In his later years, Alva took an interest in canning anything he could get his hands on. Some of his favorite things were pickles, peaches, and apricots, and he enjoyed sharing these items with people. Alva was preceded in death by his parents Arthur and Iva; wife Joan; sister Marjorie O’Dea; and niece Ann Wagner. He is survived by his step-children Donna & Mick Crosby, Karl Thomas and Blanqui Roeber, John and Kim Roeber; step grandchildren Karen, Kathy, Steve, Nikole, Nick and Christy and their respective families; nieces Janice & Alec Douglas of Peyton, Colorado and Sara & James Cawley of Crete, Nebraska. A Memorial Service for Alva was held on Friday, October 20, 2017 at 11:00 a.m. at the United Church of Christ in Exeter, Nebraska. Pastor David Coleman officiated the service. Dianne Hanson accompanied the congregation in the singing of “How Great Thou Art” and “Nearer My God To Thee.” Military Honors were held outside of the church following the Memorial Service, and they were performed by the Exeter American Legion William Sullivan Post 218. Inurnment will take place at a later date at the Fort McPherson National Cemetery, Maxwell, Nebraska. Farmer Funeral Home of Exeter conducted services for Alva. Online condolences may be left at www.farmerandsonfuneralhome.com. Memorials are suggested to the Exeter American Legion or the United Church of Christ in Exeter.

Alva Logan Smith was born in West Blue Township near Exeter, Nebraska to Arthur & Iva (Mitchell) Smith on April 1, 1920 and passed away at the Mahoney House in York, Nebraska at the age of 97 years, 6 months, and 13 days. He was one of two... View Obituary & Service Information

The family of Alva L. Smith created this Life Tributes page to make it easy to share your memories.

Send flowers to the Smith family.