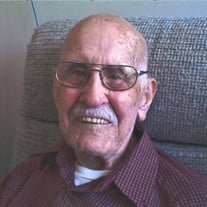 Andrew Joseph Anderson was born to Olaf V. and Anna T. (Plessel) Anderson on September 18, 1912 at Anoka, NE. He was the third child of eight children in the family. Andy was preceded in death by his wife, Helen; his parents, Olaf and Anna; sisters, Edith, Hannah, and Mabel; brothers Alfred and Harry. He is survived by his two brothers, Alvin of Milford and Charlie of Lincoln; one son, Dennis, Lincoln; two daughters, Beverly Peschel, Geneva and Linda Opfer, Fairmont; grandchildren, great-grandchildren, and great-great grandchildren; and sisters-in-law, Margaret Anderson and Beverly Jean Anderson. At two years of age Andy moved from Anoka, NE to Grover, NE and went to school at Grover, then with his two sisters attended Milford High School walking the mile to Milford each day, even coming home each day for lunch. Soon after they moved to Milford. His two older sisters quit school before graduating. Andy was the first of his siblings to graduate from High School in 1931. While in grade school he worked 2 paper routes, The Omaha Bee News and The Lincoln Star. He then began work at Sammelson’s Drug Store in his sophomore year and held that job for five years. In the summer of 1932 Andy helped lay steel in the building of US highway 6 through Milford. He worked at Hollingsworth Cigar Store for two years and later began working as a railroad station helper at Milford in 1936. He then passed the telegraph test in November of 1936 to become an agent operator. His agent-operator job consisted of relieving agents and operators at most stations between Lincoln and Ravenna, Lincoln and Hastings. Andy was assigned 2nd trick operator at Crete, NE in 1942. On January 11, 1949 Andy was assigned to the Fairmont Agency where he worked until he retired on July 15, 1977 with the Burlington Northern Santa Fe Railroad. While in Fairmont he was Past President of the Chamber of Commerce, Secretary of Fairmont Fire Department for 26 years. He was the Fairmont Village Clerk for two-years. Andy was the past master of the Fairmont Masonic Lodge #48 A.F. & A.M., also, was the secretary of Fairmont Lodge and Past Patron of Mt Maria Chapter #38 for several years. He joined the Masonic Lodge and Eastern Star in 1950. In August 1936 he married Helen Hutchinson in Sidney, IA. The marriage was kept secret for two years. At all family gatherings Andy and his brothers got together for good close harmony singing. This was second nature for all of them. Their early quartet singing started when a Milford, NE doctor started a Boy’s Club. They would study the Bible, study parliamentary Law, and do a lot of singing. Andy and Alfred sang in one quartet while brothers, Charlie and Harry, sang in the younger quartet. The Anderson family joined the United Methodist Church shortly after coming to Fairmont. Andy sang in the choir for almost 50 years. In recognition of 50 years of services as a Cooperative Weather Observer he was awarded the prestigious Edward H Stoll award in March of 1999. On April 9, 2000 he was presented a certificate and badge by the Grand Lodge A.F. & A.M. of Nebraska for 50 years as a Master Mason. Eight Master Masons were present along with Andy’s wife, Helen, and daughters Beverly and Linda. Graveside services will take place on Thursday, September 18, 2014 at 2:00 PM at the Blue Mound Cemetery in Milford, NE. The Geneva Masonic Lodge will be officiating the service. There will be no visitation/cremation.

Andrew Joseph Anderson was born to Olaf V. and Anna T. (Plessel) Anderson on September 18, 1912 at Anoka, NE. He was the third child of eight children in the family. Andy was preceded in death by his wife, Helen; his parents, Olaf and Anna;... View Obituary & Service Information

The family of Andrew J. Anderson created this Life Tributes page to make it easy to share your memories.