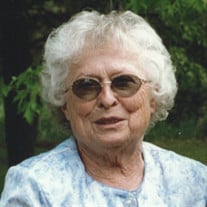 Funeral service for Angeline will be 10:00 a.m. Monday, March 23, 2015 at the Farmer & Son Funeral Home - Kotas Chapel in Milligan, Nebraska. Interment will be in the Bohemian National Cemetery. Public visitation will begin Sunday 1 pm until 8 pm with family greeting friends from 6 to 8 at the Chapel in Milligan, NE. Memorials are directed to the family for later designation. Angeline Louise (Koca) Brunkow, daughter of Louis and Alice Koca, was born October 25, 1926 on a farm in Saline County, Section 19, Atlanta Precinct, southeast of Milligan. She passed away at the age of 88 years at Heritage Crossings in Geneva, Nebraska on March 19, 2015. Angel attended District #83 through 8th grade. For the next four years she attended Milligan Public Schools, graduating as Class Valedictorian with the class of 1943. She continued her education at Lincoln School of Commerce. She worked for the U.S. Service Commission at Bruning and Fairmont Airbases, the Civil Service for the Veterans’ Administration, Milligan Public Schools and Geneva Heritage. Angel married Claremont Brunkow in 1951. She loved music and loved to dance. She had a love for animals and the outdoors and spent a lot of hours gardening and caring for her flowers and trees. Angeline was preceded in death by her husband, Claremont Brunkow, parents, Louis and Alice Koca, sister, Dorothy Bunker and brother-in-law, James Bunker. She is survived by two sons, Lucian Brunkow, Keith and daughter-in-law Becky Brunkow, daughter, Lucinda Brunkow, grandchildren, Kyle Brunkow, Hillary and Richard Liddy, Evan and Julie Brunkow, Kendra Brunkow, great grandchildren, Colton and Hunter Brunkow, Kallie Clark, William Liddy, and Evan Michael Brunkow, Jr., and many nieces and nephews.

Funeral service for Angeline will be 10:00 a.m. Monday, March 23, 2015 at the Farmer & Son Funeral Home - Kotas Chapel in Milligan, Nebraska. Interment will be in the Bohemian National Cemetery. Public visitation will begin Sunday 1 pm until... View Obituary & Service Information

The family of Angeline L. Brunkow created this Life Tributes page to make it easy to share your memories.

Send flowers to the Brunkow family.