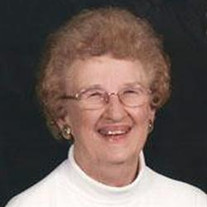 Anita May Briske was born on March 13, 1931 to James and Anna Suda Luzum on a farm west of Milligan, Nebraska that is currently owned by Dwayne Luzum. She passed away peacefully on July 2, 2014 in Geneva, Nebraska at the Heritage nursing home at the age of 83 years, 3 months and 20 Days. She was one of six children in the family. Anita attended school at District #2 and then attended and graduated from Milligan High School with the class of 1948. From 1948 to 1965 she was employed in Lincoln and in Washington, DC for a year in various office positions. She worked at various jobs including the Lincoln Telephone Company, the Highway Department at the Capitol as a PBX operator, and typing and filing clerk at the University of Nebraska. Later after Anita moved back to the Milligan area, she worked as an Avon representative and she was employed at several nursing homes in the area in the laundry departments. In April of 1962, Anita married Glen Briske of Rochester, Minnesota when he was stationed at the base in Lincoln in the Air Force. Her son, Steve, was born to this union. They moved to the Rochester, Minnesota area where they had a 160 acre dairy farm. Five years later, Anita and Steve returned home to the Milligan area to live with her parents on a acreage west of Milligan. Anita remained in this home until she moved to the Geneva Heritage nursing home for her final years. Anita was very involved in the Milligan community and she dearly loved visiting with friends and family. She was active in the Milligan Methodist Church and she was a member of the Milligan Auxiliary as well as the Geneva Hospital Auxiliary. She faithfully attended Friendship Bible Study groups with her sister-in-law, Cheryl Luzum. She dearly loved to decorate her home for the holidays and she always remembered to send holiday and birthday cards to her family. She enjoyed embroidering tea towels and she gave these as gifts to many of us. She also made quilt squares and donated them to various quilting organizations. Anita took great pride in a well-groomed yard and she spent hours mowing and pulling weeds to keep it looking beautiful. She loved it when her sister, Jeanette, brought new flowers and shrubs for her place. Anita enjoyed going for long walks along Turkey Creek during the summer and fall. She spent rainy days reading good books that she borrowed from the library. Anita was extremely proud of her Czech heritage and her Czech family. She enjoyed sharing homemade kolaches, dinner rolls and Hoska with her friends and family. One of her favorite pastimes was sitting with a circle of ladies and playing cards. Anita could spend hours playing cards with her brothers and sisters and other friends. She also loved to go to Polka dances whenever possible. Anita loved the music and she couldn’t wait to get on the floor and polka the night away. Anita’s greatest joy was found in watching her son, Steve, grow to be an independent young man and then later a husband and father. She dearly loved her three granddaughters and was ready to show their photos to anyone who walked into the room. Anita was very proud of their many accomplishments. Anita was preceded in death by her parents, James and Anna Luzum, her brother and his wife, James Luzum Jr. and Arlene brothers-in-law Kenneth Kresak and Bill DeCamp, nephew, Jay Luzum, and nieces Kim Luzum and Deanna Luzum. She is survived by her son and his wife, Steve and Kristi Briske of Milligan, Nebraska, sister, Vivian DeCamp of Minden, Nebraska, sister, Jeanette Svec and husband, Ron of Stillwell, Kansas, brother, Dwayne Luzum and wife, Cheryl of Exeter, Nebraska, sister, Diane Kresak of Milligan, Nebraska, grandchildren, Katie, Stephanie and Kylie Briske of Milligan as well as many nieces and nephews. Memorial service for Anita will be held 10:30 a.m. Saturday, July 12, 2014, at the Farmer & Son Funeral Home - Kotas Chapel in Milligan, Nebraska. Cremation - No Visitation. Memorials are directed to the family for later designation.

Anita May Briske was born on March 13, 1931 to James and Anna Suda Luzum on a farm west of Milligan, Nebraska that is currently owned by Dwayne Luzum. She passed away peacefully on July 2, 2014 in Geneva, Nebraska at the Heritage nursing home... View Obituary & Service Information

The family of Anita May Briske created this Life Tributes page to make it easy to share your memories.

Send flowers to the Briske family.