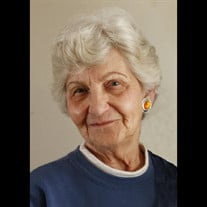 Ann H. McDonald was born to Charles J. and Anna (Korbelik) Jirkovsky on January 6, 1930 at Geneva, Nebraska, and she passed away on Monday, May 23, 2016 in Lincoln, Nebraska at the age of 86 years, 4 months, and 17 days. Ann was one of 6 children born in the family. Ann spent her entire life in and around Fillmore County. She graduated from Geneva High School in 1946 at age 16 and began working at Geneva State Bank in Geneva. She married Bill McDonald in 1950 and they had three kids, Janet, Sandy and Jerry. They moved to San Diego California where Bill was in the Navy and Ann worked in a Bank. On returning to Nebraska, Ann again worked at Geneva State Bank and later worked at the Nebraska Extension Office in Geneva, as well as a bookkeeper for several businesses in Geneva. Ann was a woman of faith and was a lifelong member of St Joseph’s Catholic Church. Ann was active in Mothers Club, Bridge Club and Alter Society. She loved listening to Polka music, dancing, playing cards and spending time with family and friends. Ann was preceded in death by her mother Anna (Korbelik) Jirkovsky and Father Charles J Jirkovsky both of Ohiowa; brother Leonard Jirkovsky of St Joseph Missouri; sister Blanch Jirkovsky of Omaha; brother Charles Jirkovsky of Cedar Rapids Iowa; brother Rudy Jirkovsky of Ohiowa; and daughter Sandy Robak of Lincoln. Ann is survived by her daughter Janet Wieser and husband Pat of Columbus; son Jerry McDonald and wife Kris of Lincoln; sister Mildred DeRosbil of Omaha; seven grand-children; four great-grand children; and many nieces and nephews. Funeral services for Ann were conducted from Farmer and Son Funeral Home in Geneva, Nebraska on Friday, May 27, 2016 at 2:00 p.m. with Father Tom Walsh officiating the service. Ron and Nancy Fleecs played guitar and sang “On Eagles’ Wings,” “Psalm 23,” and “Song Of Farewell.” All of Ann’s grand children were pallbearers including Alyson Schenk-Lincoln, Jase Robak-Lincoln, Ashton McDonald-Lincoln, Molly Wieser-Columbus, Betsy McDonald-Lincoln, C. Ben Robak-Lincoln, Alex Wieser-Columbus. Interment was held at the family burial plot at Bohemian National Cemetery in Milligan Nebraska. Memorials are directed to the family for later designation. Online condolences may be left at www.farmerandsonfuneralhome.com.

The family of Ann H. McDonald created this Life Tributes page to make it easy to share your memories.

Send flowers to the McDonald family.