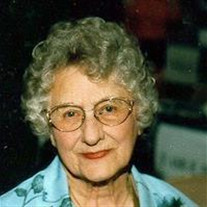 Celebration of Life service for Anna will be Friday, 2:30 p.m. at the Farmer & Son Funeral Home in Geneva, Nebraska with Pastor Michelle Gowin and Pastor Brad Barrows officiating. Visitation will begin Thursday, 5:00 p.m. until 8:00 p.m. and prior to the service on Friday beginning at 12:00 noon Interment will be in the Geneva Public Cemetery and memorials are directed to the family for later designation. Anna Evangeline (Taborsky) McPeck, age 108, entered into heaven to be with her Lord and Savior on May 21, 2017 in York, NE. She was born February 20, 1909 in Howells, NE to Anna (Husak) and Edward Taborsky. She attended the Geneva Public Schools and graduated as valedictorian for the class of 1927. Ann taught rural schools for three years, then attended York College in the summer of 1930 and also studied by extension from the University of Nebraska earning enough credits to renew her teaching certificate. The next two years she taught music and art at the Teacher’s Institutes of Fillmore, York, Clay and Saline counties and also substitute taught in the Geneva Public Schools On March 7, 1930, Ann was married to Leslie McPeck of Geneva. To this union were born two daughters; Virginia Ann in 1934 and Shirley Lou in 1935. Ann always loved music as a child and loved to hear her older sisters sing and play the piano. Her summers were filled with piano lessons. When in high school she accompanied vocal groups. While living in Geneva she was a member of the Congregational Church where she taught Sunday School class, directed Youth Choir and was a church organist. In 1945 she started teaching private piano and continued until moving to York in 1975 after her husband’s death. During those years she taught over 200 boys and girls to play the piano. Ann’s biggest delight was her family. She took pride in her daughters’ accomplishments and loved it when the children and grandchildren would come home for birthdays and holidays. She was past president of DOES, a member of York Country Club, the Hospital Auxiliary, York Book Club, past president of York Garden Club, Chapter HH P.E.O., and several bridge groups. She liked to cook, sew, knit and work in her flower garden. Ann still enjoyed playing piano for her own pleasure and for the residents of York Meadow Lark and Hearthstone. She was a member of the First United Methodist Church in York and for many years took an active part in Circles. Preceeding her in death were: her husband Leslie McPeck; daughters, Virginia McPeck Rosenau and Shirley McPeck Walker; parents, Anna and Edward Taborsky; sisters, Lillian, Beatrice, Helen and Esther; brothers, Edward and Walt; granddaughter, Ann Walker Burton; and, grandson, J.D. Walker. She leaves to celebrate her life and mourn her passing: son-in-law: Harold Rosenau; grandchildren: Pat (Barry) Falter, Pam (Roger) Fleury, Perry (Jane) Rosenau, Paul Rosenau, Scott Walker and Brent Walker; 11 great grandchildren: Adam (Kara) Brinkman, Andrew (Katee) Brinkman, Arielle Brinkman, Anna Brinkman, Megan Fleury, Marc Fleury, Alexa Rosenau, Aleah Rosenau, Greg Walker, Nicholas Walker, Mitchell Walker; and, three great, great grandchildren. Ann leaves to all her family and friends a legacy of love and music.

The family of Anna E. McPeck created this Life Tributes page to make it easy to share your memories.

Send flowers to the McPeck family.