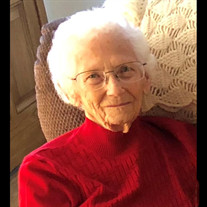 Ardoth Lorraine (Vostrez) Heinrichs, age 87, passed away on April 1, 2019 at the Heritage Nursing Home in Geneva, NE. Lorraine was born to William and Genevieve (Franck) Vostrez on March 7, 1932 near Tobias, Nebraska. She graduated in 1949 from Strang High School and went on to attend Fairbury Teachers College graduating there in the summer of 1949. She began teaching at the rural school of District 56. She taught two years at this school from 1949-1951. Lorraine married Kenneth Heinrichs on June 17, 1951 at Trinity Lutheran Church in Bruning, NE. The couple made their home on the county line west of Bruning where they also farmed. This union was blessed with the birth of three children, Rodney, Candis, and Tamara. She was an active member of the Trinity Lutheran Church. She participated in many social clubs including: Extension Club, County Line Club, Women’s Club, Trinity Lutheran Church Circle, and Strang Sewing Club just to name a few. She enjoyed music, especially polka, and attended concerts and events throughout the area. One of her long time hobbies was china painting. Lorraine’s greatest passion was reserved for her family, as she made it a point to attend school concerts, basketball, football, soccer, and volleyball games for all of her children, grandchildren, and great-grandchildren. She enjoyed all sports, but her favorite was always basketball—including the Huskers. Her favorite team was always the one her family was on, and she could always be seen cheering from the stands, as her family was her pride and joy. Left to remember her love are her children Rodney (Nancy) Heinrichs of Carleton and daughter Candis Reiter of Elmwood; sister Sharon (Marvin) Wulf, Lincoln; grandchildren Lacy (Mitch) Wiemer, Nicole (Travis) Powell, Avery (Tami) Reiter, Bradley (Renae) Heinrichs, and Landon (Leann) Heinrichs; and great grandchildren Karissa and Jaxson Wiemer, Kaylee, Luke and Brianna Powell, Noam and Mabel Reiter, Elizabeth and Sophia Heinrichs, and Laiden, Laik, Livia, and Lextin Heinrichs. She was preceded in death by her parents; husband, Kenneth; daughter, Tamara; sister Peggy Dallman and son-in law Donald Reiter. A Funeral Service for Lorraine was held on Saturday, April 6, 2019 at 10:30 a.m. at the Trinity Lutheran Church in Bruning, Nebraska. Pastor Stuart Sell officiated the service. Janelle Bruning accompanied the congregation and great grandchildren in the singing of “Jesus Loves Me” and she also accompanied the congregation in the singing of “I Was There To Hear Your Borning Cry.” A recorded selection of “Humble & Kind” was played as the recessional. Pallbearers for the service included Bradley Heinrichs, Landon Heinrichs, Avery Reiter, Travis Powell, Mitch Weimer, and Jaxson Weimer. Interment was held in the Trinity Lutheran Cemetery following the Funeral Service. Farmer & Son Funeral Home was in care of the arrangements and online condolences can be left at www.farmerandsonfuneralhome.com. Memorials are suggested to the Trinity Lutheran Church or Carleton Volunteer Fire Department Building Project.

Ardoth Lorraine (Vostrez) Heinrichs, age 87, passed away on April 1, 2019 at the Heritage Nursing Home in Geneva, NE. Lorraine was born to William and Genevieve (Franck) Vostrez on March 7, 1932 near Tobias, Nebraska. She graduated in 1949... View Obituary & Service Information

The family of Ardoth "Lorraine" Heinrichs created this Life Tributes page to make it easy to share your memories.