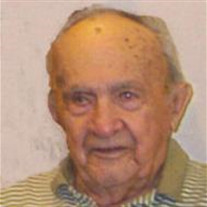 Arlan Joseph Becker was born to Joseph N. and Mathilda K. (Ries) Becker on June 14, 1927, at Exeter, NE, and passed away at the Fillmore County Hospital in Geneva, NE on March 31, 2016 at the age of 88 years 9 months and 17 days. He was the oldest of six children in the family. Arlan was baptized on June 19, 1927 and was later confirmed at the St. Stephen Catholic Church in Exeter and remained a member his entire life, attending as his health permitted. Arlan attended country school and graduated from eighth grade in David City. Arlan served his country in the United States Army from January 29, 1946 to April 28, 1947. He received his training at Fort Collins in Colorado Springs, Colorado and was stationed in little Rock, Arkansas. Arlan met his future wife, Eleanor, at a dance in Burress, NE. Their first date was to the Fillmore County Fair, and they dated for twenty months and were engaged for nine months before Arlan married Eleanor Rose Engle on June 21, 1949, at St Stephen Catholic Church, Exeter, NE. by Father Durr. They made their home in Exeter, NE and lived in the same house their entire married life. Arlan was a loving caregiver to Eleanor after her stroke in 1979. Arlan's years of employment included Huston Truck Line as a truck driver, Fillmore County Roads Department as a road grader for two years, Kiester - Walker for twelve years, and Slepicka Brothers for twenty years. He worked for his brother-in-law George Engle during the summer months. He then was self-employed doing custom blade work. Arlan and Eleanor are remembered for riding their horses and being accompanied with their friends Wayne and Gladys Petersen. They loved attending country western dances at the Border Inn. Bob O'Neill and the Playboys from Hebron, Ne was one of their favorite bands. They enjoyed going to area auctions and opened their own thrift shop in 1996. Arlan was preceded in death by his parents, brothers Roland (Jake} and Donald, brothers-in-law James Loukota, Lyle Farrell, Robert Weichert, Frank Engle, Ronald Uldrich; brothers-in law/sisters-in-law George and Phyllis Engle; Harold and Helen Engle; Willis and Beth Engle; Delbert and Ruth Sorge; sister-in-law Anna Vnoucek. Arlan is survived by his wife, Eleanor Becker; sisters Loretta Farrell of North Platte; Donna Jean Weichert of Fort Calhoun and Agnes Ann Loukota of Exeter; sister-in-law Mary Uldrich of Milligan; brother-in-law Joe Vnoucek of Friend; many nieces, nephews, and friends. Funeral Mass for Arlan will be 10:00 am Tuesday, April 5, 2016 at the St. Stephen's Catholic Church in Exeter, Nebraska with Father Steve Thomlison officiating. Public Visitation will begin Monday from 1:00 pm until 7:00 pm at Farmer Funeral Home in Exeter, Nebraska. Rosary will be Monday evening at 7:00 pm at the Farmer Funeral Home Memorials are directed to the Exeter American Legion in lieu of flowers.

The family of Arlan J. Becker created this Life Tributes page to make it easy to share your memories.

Send flowers to the Becker family.