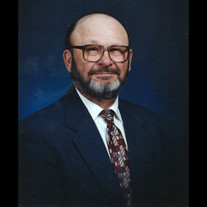 Arnold A. Capek was born to Joseph & Josephine (Herynk) Capek on January 24, 1929 near Milligan, Nebraska and passed away on December 25, 2017 at his home, near Milligan at the age of 88 years, 11 months, and 1 day. He was one of 4 children born in the family. Arnold started school at District 43 where both of his parents attended. He went to Milligan High School in 1942 and graduated in 1946. He was a life-long farmer in the Milligan, Nebraska area. He farmed with his dad first until he was inducted into the Army in August of 1951. He served in the Korean Was and was very proud of his service. After being honorably discharged from the military, he returned home in May of 1953 and began farming again. On November 14, 1953, he was united in marriage to Lucille Most at the Methodist Church in Milligan by Rev. Leroy Seavers. To this union, 3 children were born: Susan, Roger & Gerald. This last November Arnold and Lucille celebrated their 64th wedding anniversary. They lived in the same house where Arnold was born until 1977 when they moved to their new home, ½ mile south of the existing home, built by their nephews Randy & Larry Capek. Arnold served 30 years on the Milligan Rural Fire Department, a term on the Milligan School Board, served as a director on the Milligan Farmers Co-op Board, and 29 years on the Farmers & Merchants Bank Board. He was also involved with the Milligan American Legion being in charge of ticket sales for 17 years for the Stag & Stagette events. He was also a seed dealer for most of his adult life. Special memories that Arnold had included going on the 1st Korean Honor Flight to Washington D.C. and also receiving his quilt of valor in 2013. Arnold was preceded in death by his parents Joseph & Josephine Capek; sisters and brothers-in-law Clara (Louis) Tesar, Rose (Ernest) Hayek; and brother Joseph Capek. He leaves to mourn his passing his wife of 64 years Lucille Capek; daughter Susan (Charlie) Morton; sons Roger (Carol) Capek, Gerald (Margaret) Capek; sisters-in-law and brother-in-law Blanche Capek and Norma (Jim) Kotas all of Milligan, Nebraska; 8 grandchildren and 10 great grandchildren; nieces, nephews, other relatives and friends. A Funeral Service for Arnold was held on Friday, December 29, 2017 at 10:30 a.m. at the United Methodist Church in Milligan. Pastor Pat Norris officiated the service. Carol Vejraska accompanied the congregation in the singing of “Amazing Grace” and “In The Garden.” Pallbearers for the service included Randall Capek, Larry Capek, Laverne Hayek, Ronald Hayek, Dennis Kotas, and Doug Kotas. Interment was held in the Bohemian National Cemetery with Military Honors performed by the Milligan American Legion HSSK Post 240. Farmer & Son Funeral Home conducted the arrangements and online condolences can be left at www.farmerandsonfuneralhome.com Memorials are suggested to the Milligan Fire & Rescue or the Milligan American Legion.

The family of Arnold A. Capek created this Life Tributes page to make it easy to share your memories.