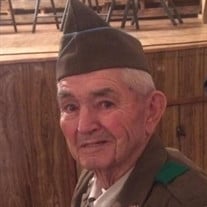 A Private Family Graveside Service for Arnold was held on Saturday, May 2, 2020 at 11:00 a.m. at the Bohemian National Cemetery in Milligan, Nebraska with Chaplain Ted Decker presiding. Honorary Casket Bearers included Jenny Thomay, Kristi Ekasala, Dan Nadherny, Michael Nadherny, Brian Nadherny and Brooke Barrow. Military Honors were conducted by the Milligan American Legion HSSK Post 240. In Lieu Of Flowers - Memorials were directed to the family to be designated at a later date. Farmer & Son Funeral Home was in charge of funeral arrangements. Arnold “Arnie” James Nadherny was born to James and Rose (Cerveny) Nadherny of Milligan on June 12, 1929 near Milligan, Nebraska. He was one of two children born in the family. After several years struggling with dementia, Arnold passed away on April 29, 2020 at Bickford Cottage in Lincoln, NE at the age of 90 years, 10 months, and 17 days. Arnold graduated from Milligan High School in 1946. He served in the Army from November 1951 to November 1953, including a tour of active combat in the Korean War. We remember his stories of him driving trucks in Korea loaded with live ammunition to replenish the front line. In finding his Army discharge papers, he received the following honors during his time served: Korean Service Metal with two Bronze Service Stars; United Nations Service Award; Combat Infantry Badge and the National Defense Service Medal. He has been a member of American Legion Post 240 of Milligan for 67 years. In November 2011, Arnold was presented with a Quilt of Valor. This was a special day for him, plus he was able to wear his Army uniform jacket for this ceremony. In his younger years, Arnie was involved with the Milligan Rural Fire Department as a volunteer and officer. He helped the Milligan American Legion bartending and with sales of pickle cards for many years at their Stag & Stagette events. He was a Pioneer Seed dealer for most of his adult life until he retired, and his son Marvin then took over the dealership. Arnold married Norma Jean Vojta on October 9, 1954 in Friend, NE. To this union, three children were born – Carol Jean, Marvin Arnold and Nancy Ann. He started his farming career working with his dad and continued farming until his retirement. Arnold raised hogs and had a cow/calf herd. Arnold & Norma enjoyed their trips to Iowa to visit casinos and also his army buddy as well as winter trips to Las Vegas and a couple trips to Hawaii. They enjoyed visiting relatives, playing cards and going to Czech dances. He enjoyed spending time with his children and grandchildren. In early November 2017, he moved to Bickford Cottage Memory Care in Lincoln where he resided until his death. The family is ever so grateful for the excellent care Arnold received. The staff knew he enjoyed Czech music. Many times, when an entertainment group had an accordion, you would see him tap his fingers and even sing in Czech along with them. Also, special thanks to the staff of Asera Care Hospice for their excellent services during the past few months. Arnold was preceded in death by his parents, parents-in-law, wife Norma (2017), son Marvin (2012) and sister Emily Nadherny. He is survived by daughters Carol (Eldon) Ogorzolka and Nancy (Larry) Barrow both of Lincoln, NE; grandsons Dan and Michael Nadherny of Milligan, NE; Brian Nadherny of Rushville, NE; granddaughters Jenny (Brian) Thomay of Brunswick, OH; Kristi (Brian) Ekasala of Lake Worth, FL; Brooke Barrow (Fiancé Tanner Webster) of Shawnee, KS; great-grandchildren Avery and Hunter Ekasala and Baby Thomay; along with cousins and relatives.

The family of Arnold J. "Arnie" Nadherny created this Life Tributes page to make it easy to share your memories.

A Private Family Graveside Service for Arnold was held on Saturday,...

Send flowers to the Nadherny family.