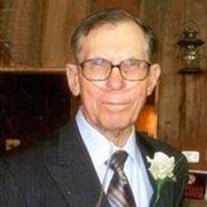 Arthur Schumacher, Jr. was born December 1, 1931 to Arthur Schumacher, Sr. and Wilhelmine (Minnie) Schallenberg Schumacher on a farm near Grafton, Nebraska. He passed away on September 1, 2013 at the Fillmore County Hospital at the age of 81 years and 9 months. He was the fourth of five children. Arthur was baptized on March 27, 1932 at Trinity Lutheran Church at Grafton and confirmed on June 8, 1947 at the Grace Lutheran Church in Geneva. When Art was a child, the family moved into Grafton and he attended grade school there. While in the fourth grade, the family moved to Geneva and Art attended Geneva Public Schools, graduating with the class of 1951. While in high school at Geneva, Art participated in basketball, football, track and participated on the Legion Baseball Team and city baseball team during the summer. After high school, Art worked for the A. Koehler Co. for one year, and then was drafted into the United States Army. He served in the Army from September 10, 1952 to September 9, 1954. He took basic training at Fort Leonard Wood, Missouri and was then stationed at Nellingen, Germany. He was affiliated with Company C, 354th Engineer Construction. He attended a 1 month course in Carpenter Heavy Construction at he USAR (EUR) Engineer School in 1954. He also took courses in Infantry, Close Combat, overhead artillery fire, and combat in the city. As a CPL (T) In 1954, Art volunteered for one more year and was honorably discharged in 1955 as a SP3 (T). Upon his discharge from the Army, Arthur continued to serve in the Army Reserves until September 9, 1960. During his military service, Arthur received the National Defense Service Medal and the Army of Occupation medal. After his military service, Art worked for a local farmer. In May of 1956, he started to work for the Burlington Northern Railroad. He worked on an extra gang for about 10 years, and then started on at the Fairmont main line full time. He later moved to the Shickley line, working there until March of 1989 when he was forced into retirement for heart related issues. Art loved to bowl, and he bowled for many years on teams at Geneva and York receiving many trophies over the years. Art also enjoyed baseball and he attended a game with his friend, Walt Jones, in Chicago between the Cubs and Dodgers, and it was one of the highlights of Art’s life. Art also loved watching the Nebraska Cornhusker football games and volleyball games on TV. He even got to watch the Husker football team hang on for the win on Saturday night. Art was married to Darlene Saatmann on May 3, 1959 at Grace Lutheran Church. They had three children: Allen Ray, Donna Marie, and Michael Allen. During his married life, Art and Darlene enjoyed trips to Colorado, Wyoming, South Dakota, North Dakota and Wisconsin. They also enjoyed trips to Long Island, New York to see his sister, Wilma. Art felt very bless that after all his health problems, he and Darlene were still able to celebrate their 50th anniversary in May of 2009 with family and friends. A great friend, Bill Chrastil, provided entertainment. Art was already talking about reaching their 55th anniversary next spring. Art was preceded in death by his parents; sisters Helen Hall and Dorthy Everts; brothers-in-law Raymond Hall and John Struppa; and son Michael Schumacher. He is survived by his wife Darlene of Geneva; son Allen of Geneva; daughter and son-in-law Donna & Monte Stouffer of Deshler, Nebraska; grandchildren Dalton, Dana, and Raelin Stouffer and Ambrea Schumacher; great grandchildren Brynlee and Emmett Gillian; sister Wilma Struppa of Long Island, New York; brother and sister-in-law Gary and Janice Schumacher of Longmont, Colorado and brother-in-law Harold Everts. Funeral services for Art were held on Wednesday, September 4, 2013 at 10:30 a.m. at the Grace Lutheran Church in Geneva, Nebraska with Pastor Stephen Kruschel officiating. Denise Hinrichs accompanied the congregation in the singing of “The Old Rugged Cross,” “Nearer My God To Thee,” “The Lord’s My Shepherd,” and “Lord, Take My Hand And Lead Me.” Pallbearers for the service included Dalton Stouffer, Tom Nun, Chris Nun, Bryan Nun, Duane Rhola and Tony Godown. Interment was held in Geneva Public Cemetery with Military Rites performed by the Geneva VFW Samuel J. Marsh Post 7102. Memorials are directed to the family. Farmer & Son Funeral Home of Geneva conducted the arrangements.

Arthur Schumacher, Jr. was born December 1, 1931 to Arthur Schumacher, Sr. and Wilhelmine (Minnie) Schallenberg Schumacher on a farm near Grafton, Nebraska. He passed away on September 1, 2013 at the Fillmore County Hospital at the age of... View Obituary & Service Information

The family of Arthur Schumacher, Jr. created this Life Tributes page to make it easy to share your memories.

Send flowers to the Schumacher, family.