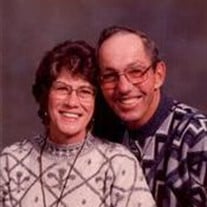 Arvin Charles Wood was born March 20, 1928, on a farm near Osborne, Kansas and passed away peacefully at 2:45 a.m., Thursday, October 4, 2012, at Heritage Crossings in Geneva, Nebraska, at the age of 84 years, six months, and fourteen days. Arvin was one of ten children born to Everett and Myra (Kirby) Wood, and the eldest of the second set of twin boys. He was raised near Osborne, Kansas, and left high school during his senior year to join the military as all of his older brothers had done. Although he was ineligible to join, due to one leg being longer than the other, he was always very proud of his brothers service, and of his country. He worked as a bill board sign poster during his younger years, and then as a farm laborer and an IH set up man and delivery driver for Geneva Implement. He also did farm work for Dennis Domeier and Bob Ackland, as well as part time work for Geneva State Bank and at the Geneva city dump site.Arvin was given the nickname of "Corkey" at a young age and his twin, Arden became "Ski" from a well known comic script at the time.Corkey married Nina Ruth Allen in Osborne, Kansas, on January 3, 1948, and were blessed with four boys, Dennis, Steven, Rodney, and Kim, and one daughter, Jannette. The family was baptized together at St. Peters Lutheran Church in North Bend, Nebraska in 1960, and later became members of the Prince of Peace Lutheran Church in Geneva. Corkey was preceded in death by his parents,his wife, Nina, sons, Steven and Rodney, his sister, Carol Rogers, his brothers Doyle and Orin, half sisters, Evelyn Nesbitt, and Pauline Foster, half brothers, Melvin (Pat) and Wayne (Mike).He is survived by his children, Dennis (Marlene) of Plattsmouth, Jan of Bellevue, and Kim (Suzanne) of Bruning, grandchildren, Denise (Rick) Winters of Fremont, Troy (Gina) of Burke, Virginia, John (Gynelle) Gaskell of Singapore, Timothy (Angel) of Fresno, Texas, Gabriel of Memphis, Tennessee, and Scott (Sandi) of Fairbury, great grand children Amelia, Bethany and Tori Winters of Fremont, Jacob, Creighton, and Sissy of Burke, VA, Avery, US Army, serving in South Korea, Shannon Gaskell of Denver, CO, Ellie and Jacob Gaskell of Singapore, Timora and Sawyer of Fresno, TX, Desmond, Gabe Jr., and Taliyah of Memphis, TN., Brothers, Norris of Moses Lake, Washington, Olin of Junction City, Kansas, Arden of Weymouth, Massuchusetts and Loy (Winifred) of Kansas City, Missouri, sisters, Sally Cooper of Osborne, Kansas and Cenith (John) Cowing of Clay Center, Kansas, sister in law Donna of Woodward, Oklahoma, and many nephews and neices, and friends.Memorial service for Corkey will be Monday, October 8, 2012, at 10:00 a.m. at the Prince of Peace Lutheran Church in Geneva, Nebraska . No visitation - Cremation. Inurnment will be in the Cedar Cemetery in Cedar, Kansas. Memorials are in care of the family.

Arvin Charles Wood was born March 20, 1928, on a farm near Osborne, Kansas and passed away peacefully at 2:45 a.m., Thursday, October 4, 2012, at Heritage Crossings in Geneva, Nebraska, at the age of 84 years, six months, and fourteen days. Arvin... View Obituary & Service Information

The family of Arvin C. "Corkey Wood created this Life Tributes page to make it easy to share your memories.