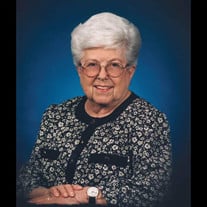 A Memorial Service for Audrey will be held on Friday, May 21, 2021 at 10:30 a.m. at the United Methodist Church in Geneva, Nebraska. Kim Dunker will officiate the Memorial Service. A Graveside Committal of Ashes will take place in the Geneva... View Obituary & Service Information

The family of Audrey Nichols created this Life Tributes page to make it easy to share your memories.

A Memorial Service for Audrey will be held on Friday, May 21,...