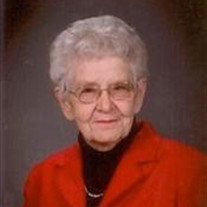 Barbara “Jean” Hellbusch, 83, of Geneva, died peacefully in her sleep Sunday, April 7, 2013 at the Lexington in Lincoln. She was born November 7, 1929 in Cedar Rapids, NE to John King and Lillian Mae Babbitt Cox. She attended rural school and Cedar Rapids High School where she graduated in 1947. On January 11, 1950 she married Edward Oscar Hellbusch at Peace Lutheran Church at Timber Creek, Belgrade, Nebraska. Jean and Ed lived on Nebraska farms near Belgrade, Seward and Geneva. They moved into town from the farm in 1982. Jean was a homemaker until 1964 when she began working at Fulton/Gambles Store until 2006 when she retired. She was very active in Prince of Peace Lutheran Church, Geneva, NE. She was always ready with a listening ear and an easy smile. She had a passion in her later years for walking and often had to turn down offers for a ride. She spent the last 11 months of her life at the assisted living facility, the Lexington, where she was well-cared for and made fast friends. Her pride in life was her four grandchildren, her six great grandchildren, and she felt especially blessed by her many dear and beloved friends. She is preceded in death by her parents, John and Lillian Cox; husband, Edward; four sisters, Ethel Vang, Gertrude Kampman, Wilma Young, and Ellen Wagner; one brother, Daniel Cox. She is survived by daughter, Sandi and Jim Campbell of Lincoln; son, Randy and Shelly Hellbusch of Friend; grandsons, Jeremy and Sabrina Hellbusch of Lincoln; Jeff and Katie Hellbusch of Edmond, OK; two granddaughters, Michelle and Scott Eckman of Lincoln; Jodi and Aaron Fintel of Fairmont; six great grandchildren, Sam Hellbusch, Ellie Eckman, Hunter and Hudson Fintel and Weston and Wyatt Hellbusch, brothers, John and Phyllis Cox of Lincoln, NE and Carroll and Betty Cox of Council Bluffs, IA Funeral service for Barbara Jean will be Wednesday, April 10, 2013 at 10:00 a.m. at the Prince of Peace Lutheran Church in Geneva, Nebraska. Visitation will begin Tuesday 3:00 p.m. until 8:00 p.m. with family greeting friends from 5 - 7 at the Farmer & Son Funeral Home in Geneva, Nebraska. Interment will be in the Geneva Public Cemetery. Memorials are directed to Prince of Peace Lutheran Church in lieu of flowers

Barbara &#8220;Jean&#8221; Hellbusch, 83, of Geneva, died peacefully in her sleep Sunday, April 7, 2013 at the Lexington in Lincoln. She was born November 7, 1929 in Cedar Rapids, NE to John King and Lillian Mae Babbitt Cox. She attended rural... View Obituary & Service Information

The family of Barbara Jean Hellbusch created this Life Tributes page to make it easy to share your memories.

Barbara “Jean” Hellbusch, 83, of Geneva, died peacefully in her...

Send flowers to the Hellbusch family.