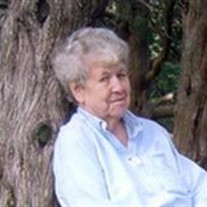 Services for Barb will be held on Tuesday, May 3, 2011 at 2:30 p.m. at the First Congregational united Church of Christ in Geneva with Pastor William Switzer officiating. Visitation will be held on Monday from 1:00 p.m. to 8:00 p.m. at the Farmer & Son Funeral Home in Geneva. Memorials are directed to the First Congregational United Church of Christ. Barbara Noyes Wilkins, was much loved. Barb was born in Pittsfield, Massachusetts to Howard and Dorothy Noyes on April 12, 1923, two years after her sister Virginia. When she was three, her father died and her mother sent her to live with family in Vermont when she took a stenographer/secretary job at Riverside Church in New York City. Barb was reunited with her mother when she was nine and lived in New York until college. She spent several summers at camp where she learned to swim and canoe. Barb loved making art from an early age. Instead of attending an Art School, she went to Denison University (Granville, Ohio) on a scholarship. After graduation in 1944, she worked for the New York firm that still makes Vicks products and at that time Prince Machiabelli perfume. The Riverside Church was Barb’s spiritual home. Her mother was the private secretary to Riverside’s founder, the liberal activist theologian and popular author, Harry Emerson Fosdick. In 1945, Barb met Hugh Wilkins at a young adult group supper at Riverside. Hugh showed up at her work the next day to take her to lunch. After their wedding June 7, 1947, Hugh and Barb moved to Boston where Hugh finished a course that had been interrupted by his military service. After he finished the Harvard MBA, they moved to New York where he worked for one of the pioneer firms in market research. Their son, Hugh Campbell, always called Cam, was born in 1948 in New York. Hugh & Barb moved to Lincoln, where Hugh worked briefly as a real estate agent. When a job opened up at the Geneva State Bank’s insurance agency, they moved to Geneva. Susan Elizabeth was born in 1949. Beth Margaret (Betsy) was born in August of 1951. Katherine Grace was born in 1960 at the York hospital—during a blizzard—a few hours after Dr. Charles had told Barb the birth would be a few days yet. Barb joined the Congregational Church and loved singing in the choir. She was very musical and played piano, organ, and guitar. Barb read voraciously. It is no coincidence that she raised two librarians (Kathy and Susie), a museum collections manager (Beth), and a Library Board President (Cam). She loved the Geneva Library. She helped pay for and design the Secret Garden planted around the library. Anyone who ever visited Barb’s house saw the large number of houseplants she kept indoors. With many fond memories of the camps Barb had attended or worked at in her youth, she continued to camp with her family, at Girl Scout and church camps—thoroughly enjoying being a counselor at summer Canoe Camps. She and Hugh both loved Scouting. Barb was a very talented artist, who painted loved to draw and photographed many subjects. She was one of the first members of the Geneva Art Guild. She made many friends at art shows, workshops, and meetings. She admired the talent and skill of many local artists and encouraged beginning artists by giving art workshops. In 1974, Barb began attending the University of Nebraska in Lincoln where she later received her Bachelor of Fine Arts. Throughout their married life, Barb and Hugh hosted an ever-changing menagerie of stray dogs, sheep, a goat, horses, cows, ducks, goldfish and Samantha, a cat that lived to be 19. Barb’s mother suffered from memory loss for many years before her death. In recent years, Barb showed signs of the same disease, yet lived in a happy state of mind, forgetful and slightly disorganized, but fairly content. Since February 2010, Barb lived at the Hearthstone nursing home in York. She was treated with great consideration and we are grateful to the doctors and staff. Barb Wilkins was a very determined individual, which time and age and disease could not diminish. The family has many stories to share. Barb leaves us with a legacy of lively curiosity, love of beauty and order, creativity, perseverance, and wit. However sad we are to lose her, we are grateful that she was not in pain at the end. She died peacefully. We will miss her. There are no others quite like her in the world. Wherever she is, she is currently reading a book, smoking a Benson & Hedges menthol 100, talking with Cam, petting her cat, Samantha, and planning a garden addition or painting . . . She is waiting for Hugh to come home from the bank.

Services for Barb will be held on Tuesday, May 3, 2011 at 2:30 p.m. at the First Congregational united Church of Christ in Geneva with Pastor William Switzer officiating. Visitation will be held on Monday from 1:00 p.m. to 8:00 p.m. at the... View Obituary & Service Information

The family of Barbara A. Wilkins created this Life Tributes page to make it easy to share your memories.