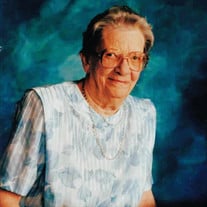 A Memorial Service for Bee will be held on Saturday, June 27, 2020 at 10:30 a.m. at Farmer & Son Funeral Home-Kotas Chapel in Milligan. Pastor Brian Tuma will officiate the service. A book signing will be held on Friday, June 26, 2020 at Farmer & Son Funeral Home-Kotas Chapel from 3:00 p.m. to 8:00 p.m. with family present from 5:00 p.m. to 7:00 p.m. Memorials in lieu of flower are directed to Fairview Manor in Fairmont, Nebraska. Beatrice Bernice Vavra was born in Milligan, Nebraska on May 11, 1924 to Henry and Albina (Korbelik) Rischling and passed away in Fairmont, Nebraska on May 10, 2020 at the age of 95 years, 11 months, and 30 days. Bea, as she preferred to be called, attended Milligan Public School and graduated with the class of 1941. After graduating, Bea moved to Lincoln, Nebraska where she found employment as an elevator operator in both the Sharp and Stuart buildings. In 1942, she married Sgt. John R. Dodson of Caney, Kansas who was stationed at the Air Force Base in Lincoln. Bea followed John to various Air Force Bases where he was stationed, and she enjoyed meeting new friends and learned their habits and customs. When John was discharged from the Air Force, they moved to Kansas City, Missouri where they made their home for several years. In 1954, they moved to Milligan, Nebraska. Their marriage ended in divorce. Bea stayed in Milligan, and in 1956 she married Donald F. Vavra of Milligan, Nebraska and the family moved to the farm north of Milligan. While living on the farm, she also found employment at the Heritage Nursing Home in Geneva, working there for 10 years. In 1979, Donald passed away and Bea went to work as a dispatcher in the Fillmore County Sheriff’s office in Geneva as a dispatcher. She held this position for 12 years and retired in 1992. She later took a job as a librarian in the Milligan Library, working in this capacity for 10 years. She always enjoyed working with people, visiting, and playing bingo with friends. She was preceded in death by her husband Donald F. Vavra; 2 infant sons; her parents; sisters Viola Marker, Sylvia Hamouz, and Ruby Belemsich. She is survived by her children Don L. Vavra and wife Marie of Broken Arrow, Oklahoma, Vicki Spilker and husband Robert of Fairbury, Nebraska, Mike Dodson and wife Kim of Odessa, Missouri, and Steve Vavra and wife Patty of Beaver Crossing, Nebraska; grandchildren Ranae Vendel and husband John and their children Case and Olivia of Broken Arrow, Oklahoma, Jaime Bowlin and her child Aubrey Bowlin of Tulsa, Oklahoma, Chad Spilker and wife Alicia and their children Bailey and Brayden Spilker of Cortland, Nebraska; Stephanie and Preston Barton and their children Connor and Quinn of Highlands Ranch, Colorado, Cody Vavra and wife Sara of Aurora, Colorado, and Cacey Vavra of Omaha, Nebraska; and many relatives and friends.

A Memorial Service for Bee will be held on Saturday, June 27, 2020 at 10:30 a.m. at Farmer & Son Funeral Home-Kotas Chapel in Milligan. Pastor Brian Tuma will officiate the service. A book signing will be held on Friday, June 26, 2020 at... View Obituary & Service Information

The family of Beatrice Vavra created this Life Tributes page to make it easy to share your memories.

A Memorial Service for Bee will be held on Saturday, June 27,...