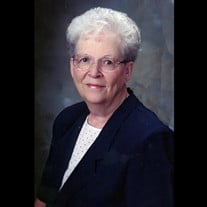 Bernadeen Anna “Bernie” Larsen, 89, formerly of Exeter, Nebraska, passed away on Sunday, October 21, 2018, at Ambassador Health in Nebraska City, Nebraska. She was born on March 29, 1929, to Marcus and Mabel (Range) Johnson at their farm near Friend, Nebraska. Her education was obtained through School District no. 92 in rural Saline County, Friend High School, the University of Nebraska in Lincoln and Commercial Extension Business College in Omaha. Bernie was baptized and confirmed in the Lutheran faith. On October 29, 1950, Bernie and Ted Larsen were married at Our Savior’s Lutheran Church at Cordova, which later became part of Trinity Evangelical Lutheran Church. She taught Sunday School and was a member of the church women’s organization at Trinity. Bernie was a supportive wife to Ted and mother of seven children. Because of son Rodney’s developmental disabilities, she was a life-long advocate for services to persons with special needs. She was employed at Nebraska Public Power District office in Exeter for 21 years. Along with Ted, she supported the creation of a Senior Center in Exeter and enjoyed being active there. She was a member of the William Sullivan American Legion Auxiliary unit 218. She enjoyed traveling and spent several winters with Ted in Weslaco, Texas. She had talents for drawing, sewing, and writing, enjoyed playing cards, and cared greatly for friends and family. Bernie is survived by sons Larry of Wuppertal, Germany, Tom of Galesburg, Ill., and Wayne (David Rush) of Murphysboro, Ill.; daughters Connie (Pete) Kreifels of Dunbar and Karen (Craig Kenworthy) Larsen of Seattle, Wash.; sister-in-law Ruth Steinke of Des Moines, Iowa; grandchildren David Larsen of Wuppertal, Germany, Jessica (James) Arent of Bellevue and Jackie Kreifels of Lincoln; great-grandchildren Leo, Ellis, and Oliver Meyer of Lincoln and many nieces and nephews. She was preceded in death by her parents, husband, sons Ted and Rodney, twin brother Bernard Johnson and sisters and brothers-in-law Jen and Jake Wattles and Myrna and Jack Mehser. A Funeral Service for Bernie was held on Saturday, October 27, 2018 at 10:30 a.m. at Trinity Evangelical Lutheran Church in Cordova, Nebraska. Pastor Michelle Kanzaki officiated the service. Amy Emshoff accompanied the congregation in the singing of “Softly & Tenderly,” “Borning Cry,” and “Children Of The Heavenly Father.” Pallbearers for the service included Tom Larsen, Wayne Larsen, David Larsen, David Rush, Pete Kreifels, Craig Kenworthy, and James Arent. Interment was held in the Zastrow Cemetery following the Funeral Service. Farmer Funeral Home of Exeter was in care of the arrangements and online condolences can be left at www.farmerandsonfuneralhome.com. Memorials are suggested to the Trinity Evangelical Lutheran Church in Cordova.

The family of Bernadeen A. "Bernie" Larsen created this Life Tributes page to make it easy to share your memories.