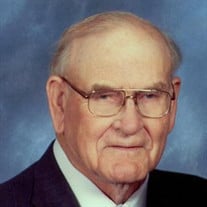 Funeral services for Bernard will be held on Saturday, January 16, 2016 at 2:00 PM at Zion Lutheran Church in rural Tobias, NE with Pastor Ryan Meyer officiating. Visitation will be held on Friday, January 15, 2016 from 1:00 PM through 8:00 PM with the family greeting friends and family from 3:00 PM till 6:00 PM at Farmer & Son Funeral Home - Kotas Chapel in Milligan, NE Military graveside services well be held in the church cemetery, Zion Lutheran Cemetery. Memorials are to be directed to the family for a later designation. Bernard Eldo Bartels was born October 6, 1923, to Ernst and Alwine (Schweer) Bartels near Tobias, Nebraska; was baptized October 28, 1923 and confirmed April 10, 1938 at Zion Lutheran Church near Tobias. He married Deloras Schwisow at Immanuel Lutheran Church near Daykin on May 30, 1948. He died January 10, 2016, at the age of 92 years, three months, and four days. We will miss our hard-working, quietly funny, always concerned, loving father, grandfather, great-grandfather, brother, and uncle. Bernard or B.E. as he was usually known, lived and worked with his parents, brothers, and sisters on a farm near Tobias. He harvested corn by hand – quickly pulling the ears from the stalks, tearing off the shucks, and tossing the corn into the wagon pulled by horses. He played baseball for the Tobias town team and was an avid baseball fan his whole life. He and his mother often listened together to the radio broadcasts of games of Grandma’s favorite team, the St. Louis Cardinals. In 1945, Bernard went off to the Navy in World War II aboard an aircraft carrier. Off-shore from Okinawa, Bernard had an emergency appendectomy aboard ship. He awoke from surgery to hear, “Japan has surrendered.” After discharge, he turned to the home place. Deloras had once told Bernard that she “wasn’t going to marry one of those Bartels boys.” But she changed her mind and they were married May 30, 1948. They bought and lived on a farm a quarter mile from Bernard’s parents. They raised grain, pigs, chickens, and cattle. Later, they started selling milk - first Grade B and in 1966, Grade A. Bernard was a member of Zion Lutheran Church; the American Legion, serving as Commander of the local post for several years; and the Saline County Fair Board. He and Deloras started 4-H clubs for local youth and took their children on two-week car trips about every other year - Bernard would drive and Deloras would plan stops at all the historical and educational sites. He loved and was immensely proud of his grandchildren and great-grandchildren. He attended many of their activities, including annual dance and music recitals. Bernard and Deloras remained deeply devoted to each other. They continued to travel together, driving their own car and later joining bus tours, around the USA and to Canada. In April, 2011, when it was evident Deloras needed to move into Assisted Living in Fairbury, Bernard left his home on the farm to be with and care for her. He remained with her until her death on July 13, 2014. But, Bernard never really stopped farming – he was proud that he could still run the combine at age 89. Even after moving to Fairbury, he often drove the 60-mile round trip to Tobias to help his son work on his farm and the “home place” – the Ernst Bartels farm which has been in the family for over 100 years. Bernard was preceded in death by his wife Deloras Schwisow Bartels; son Dennis Bartels; parents Ernst Bartels and Alwine Schweer Bartels; brothers Martin Bartels and Erwin Bartels; sister Viola Reetz; and son-in-law William Hermes. He is survived by his son Keith and wife Mary Bye Bartels of Lincoln; daughter Jean Bartels and husband Steve Armbruster of Elmwood; daughter-in-law Janet Vavra Bartels of Tobias; grandchildren Toby and Crystal Bartels, Jessica Bartels and Chinedom Ikwuakor, Sean and Susan Hermes, Brent and Tiffany Hermes, Tamara and Jeremy Mostek, Jonathan and April Vavra-Fong, Alicia Armbruster, and Claire Armbruster; great-grandchildren Ava Bartels, Evelyn Hermes, Harriet Hermes, Dylan Mostek, Mason Mostek, Ayden Vavra-Fong, Aspen Vavra-Fong, and Devin Searcy and two who will be born in February; twin sister Berniece Pfingsten ; sisters-in-law Lorna Bartels, Janile Roesler, and Joanne Schwisow; brothers-in-law Elroy Schwisow, Roger Schwisow and Leslie Schwisow; aunts: Eleanor Schwan, Darlene Schweer, and Irene Marschman; and many nieces, nephews, and cousins.

Funeral services for Bernard will be held on Saturday, January 16, 2016 at 2:00 PM at Zion Lutheran Church in rural Tobias, NE with Pastor Ryan Meyer officiating. Visitation will be held on Friday, January 15, 2016 from 1:00 PM through 8:00... View Obituary & Service Information

The family of Bernard E. Bartels created this Life Tributes page to make it easy to share your memories.

Funeral services for Bernard will be held on Saturday, January...