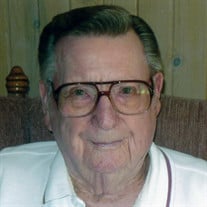 A Memorial Service will be held on Thursday, October 19, 2017 at 2:30 p.m. at Farmer & Son Funeral Home in Geneva, Nebraska with Kim Dunker officiating. There will be a Time of Gathering from 1:30 p.m. until the start of the Memorial Service at 2:30 p.m., with the family greeting friends and relatives to share memories and stories of Bernard. No Visitation - Cremation. In Lieu of Flowers - Memorials are to be directed to the family for a later designation. There will be a Private Family Burial Of Ashes. Bernard Marion Lovegrove was born to Marion Lovegrove and Christina (Slezak) Lovegrove on August 19, 1928 on a farm northeast of Fairmont, Nebraska. He attended school at Rural District 27 and graduated from Exeter High School in 1945. After graduating from high school he started farming with his father. He was united in marriage with Phyllis Strauss on May 18, 1948 when they moved to his grandfather’s farm where they continued farming until 1971 when his health forced him to discontinue their family farming operation. To this union they were blessed with three children; Peggy, Ronald and Thomas. Bernie loved to farm and enjoyed feeding cattle and raising hogs. It was very exciting for him to start irrigating and raising good crops after many years of dry land failures. While on the farm he served on the Fairmont Rural Fire Board, The Fairmont Township Board and the Fairmont School Board and on the Exeter Feeders and Breeders Board. The family moved to Kearney, Nebraska in 1971 where he joined the Dekalb Seed Company as a District Sales Manager after being a farmer dealer for several years while farming. Bernie and Phyllis moved back to York, Nebraska and continued his work in the seed business with Dekalb until 1982 when he joined the Garst Seed Company. While with the Garst Seed Company as District Sales Manager, he also served on the Garst Company Executive Advisory Board. While with the Garst Seed Company, he enjoyed earning the honor of bringing his district to have the top sales in Nebraska and Colorado for several years until his retirement in 1991, after 27 years in the seed business. Bernie and Phyllis enjoyed their opportunity to attend National Seed Sales Conference meetings, which took them to almost every state in the union, including Mexico. He is survived by his wife, Phyllis; daughter, Peggy (Bill) Jones of Lincoln, NE; sons, Ronald (Natalie) Lovegrove of Hastings, NE and Thomas (Kris) Lovegrove of Parker, CO; grandchildren, Scott Jones, Andy Lovegrove, Christopher Lovegrove and Kati Lovegrove; great grandson, Tanner Jones. He is preceded in death by his parents, Marion and Christina (Slezak) Lovegrove and his sister, Bernice Hall.

A Memorial Service will be held on Thursday, October 19, 2017 at 2:30 p.m. at Farmer & Son Funeral Home in Geneva, Nebraska with Kim Dunker officiating. There will be a Time of Gathering from 1:30 p.m. until the start of the Memorial Service... View Obituary & Service Information

The family of Bernard Marion Lovegrove created this Life Tributes page to make it easy to share your memories.