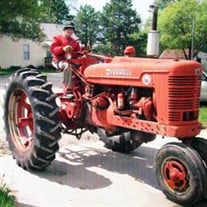 Bernard J. Miller Sr., 94, after living a full life, passed away October 15, 2014. Bernard was born on February 26, 1920 to Frank & Fina (Shaub) Miller in Exeter, NE. On January 27, 1953 Bernard was married to Ruth Vantine and to them 8 children were born. As a farmer’s son, he attended country school south of Exeter through the 8th grade. Bernard grew up on the family farm and lived there until 1978. In 1978 he moved into the town of Exeter. Bernard had a passion for red tractors and collecting clocks and watches. He enjoyed repairing watches in his free time. Being born on a farm, farming was what Bernard knew and he farmed throughout his life. Along with farming, he was a custodian at the school in Exeter for a number of years. After retiring from being a custodian at the school he sought out mowing yards around town. He was a man who loved to fix cars and could repair anything. One of his passions was playing the accordion and pump organ, which showed every time he played. Bernard is survived by his children, sons; Harry (Lori) Miller, York, NE; Bernard John Miller Jr. & Carol Casper, Exeter, NE; Roger (Janet) Miller, Exeter, NE; Mark Miller & Monica Telliho; daughters, Elaine (Joel) Vavra, Crete, NE; Ann (Daryl) Styskal, Exeter, NE; Amy Skinner, Exeter, NE; and Karen (Dave) Elznic, Geneva, NE; 18 grandchildren and 13 great-grandchildren. He was preceded in death by his wife, Ruth “Susie” Miller; sisters, Emma Coates & Ruth Coffey; brother, George Miller and parents, Frank & Fina Miller. Mass of Christian burial will be 1:00 PM, Monday, October 20, 2014 at St. Stephen’s Catholic Church in Exeter, NE. There will be no rosary. Visitation will take place Sunday, October 19, 2014 from 1:00 PM-8:00 PM at Farmer Funeral Home in Exeter. Memorials are suggested to the family for a later designation. Burial Exeter Cemetery

The family of Bernard J Miller Sr. created this Life Tributes page to make it easy to share your memories.