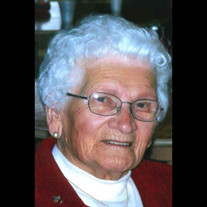 Bessie Wulf was born to Charles D. & Anastasia “Sadie” (Prachar) Nedza on November 21, 1917 at Tobias, Nebraska, and passed away on December 13, 2020, at Heritage Crossings Nursing Home in Geneva, Nebraska, at the age of 103 years and 21 days. She was one of 8 children born in the family. Bessie was baptized and confirmed in May of 1944 at St. John’s Lutheran Church in Ohiowa and remained an active and faithful member the rest of her life. Bessie attended school district 41 in Saline County through the 8th grade. As a young woman, she worked for the McCurdy Family and then went to work at the Geneva Hotel earning .50 per week. Bessie met her husband, Arthur Wulf, at a dance in Tobias. They were married February 21, 1941, at Fairbury, Nebraska. Bessie and Arthur made their home on the family farm southwest of Ohiowa which was previously bought by the Henry Wulf family in 1901. It was here that they raised five children: Kathleen, Dorothy, Ronald, Robert (twins), and Patricia. While raising her family, Bessie was always busy. She found time to be a 4-H leader for 10 years, belonged to Country Neighbors Extension Club, taught Bible School, and sewed for Lutheran World Relief. These were in addition to being a farmer’s wife, helping her husband with farm work and livestock, cooking, gardening, canning and baking. Bessie was a wonderful cook and her family especially enjoyed the kolache’s and crescent rolls. She also was a skilled sewer, making many craft items for Christmas and many beautiful quilts, making sure each child and grandchild had one. Bessie enjoyed music and loved square dancing, playing the accordion (button accordion), singing and yodeling. Bessie was self taught on the accordion and piano teaching herself to play by ear. In later years, she played in the ‘Kitchen Misfit’ band. They played at various local events and parades. Bessie also enjoyed writing and sending cards and letters to family and friends. At one time, Bessie had six pen pals from foreign countries. In June of 2012, Bessie was Grand Marshal for Ohiowa’s 125th Celebration. Bessie truly enjoyed her family and attended as many activities as possible which included ball games, plays, concerts, weddings, graduations, and church programs. Survivors include her three children Robert (Louise) Wulf of Ohiowa, Nebraska, Dorothy (Larry) Smith of Geneva, Nebraska, and Patricia Hosick of Cozad, Nebraska; daughter-in-law Phyllis Wulf of York, Nebraska; 16 grandchildren; 30 great grandchildren; and 13 great great grandchildren. Bessie was preceded in death by her husband Arthur (1981); son Ronald Wulf (2014); daughter Kathleen Hoffmaster (2019); Sons-In-law Allan Hoffmaster (2016) and Randy Hosick (2012) grandson Darin Hoffmaster (2015); and great granddaughter Alicyn Hosick (2008). Bessie was the youngest and last of her siblings. Bessie was a woman of strong faith and we were blessed to share her last communion and hear her repeat the Lord’s Prayer with us. A Funeral Service for Bessie was held on Friday, December 18, 2020 at 10:30 a.m. at St. John’s Lutheran Church in Ohiowa, Nebraska. PMA Jim Germer officiated the service. Nancy Cradduck accompanied Gaylord Cradduck in the singing of “The Old Rugged Cross” and “How Great Thou Art.” She also accompanied the congregation in the singing of “God Be With You Til We Meet Again” and “Joy To The World.” Nancy Cradduck and Kaye Mussman also provided special music with an instrumental version of “Silent Night” on the pianos. Pallbearers for the service included Troy Hoffmaster, Duane Hoffmaster, Terry Hoffmaster, Aaron Wulf, Brian Wulf, Douglas Smith, Travis Hosick and Trent Hosick. Honorary pallbearers included Darin Hoffmaster, Tyron Hoffmaster, Donald Smith, Daryl Smith, Barbara Hunt, Sandi Pickrel, Michelle Sinsel, Cheryl Broman, and Shellie Meyer. A Graveside Service was held in the Ohiowa Public Cemetery following the Funeral Service. Farmer & Son Funeral Home was in care of the arrangements and online condolences can be left at www.farmerandsonfuneralhome.com Memorials are suggested to the St. John’s Lutheran Church or the Ohiowa Fire Department.

The family of Bessie Wulf created this Life Tributes page to make it easy to share your memories.

Send flowers to the Wulf family.