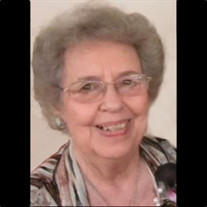 Bethine Apley Wilson Garrison was born to Thurman G. Apley and Birdeen Edwards Apley on April 18, 1924, on a farm southeast of Bruning, Nebraska. She passed away on March 16, 2021, at the Fillmore County Hospital in Geneva, Nebraska, at the age of 96 years, 10 months, and 28 days. Beth was one of four children in her family. Beth lived nearly her entire life in and around Bruning, Nebraska. Her parents were farmers and, as children and young adults, Beth and her siblings helped on the family farm. Beth had a deep and abiding faith in God, was a lifelong Methodist, and was a member of the Bruning United Methodist Church where she was confirmed. Beth was an active and social student and graduated from Bruning High School in 1941. After almost being persuaded to become a teacher, Beth decided to pursue her goal of being a hair dresser instead. She recruited her sister, Janis, to join her, and in 1947, they graduated from Hastings Beauty College becoming licensed beauticians soon after. For the next six decades, Beth made sure the ladies of Thayer County and the surrounding communities looked their best each and every week. Beth and Janis began their careers with the Apley Sisters Beauty Shop located in the hotel building in Bruning. After Janis married, Beth continued on her own, moving her business to her own home in 1953. Beth’s Beauty Shop became a fixture in Bruning, not only for the quality shampoos, cuts, and permanents, but more importantly for the friendship and fellowship her little one-chair operation provided for her customers. After Beth’s retirement, her daughter, Barbara, took over the business and for a while, Beth retained an active role answering phones and setting out treats and coffee for the traditional Friday luncheons at the Beauty Shop. On September 18th, 1949, Beth married R. Winton Wilson of Shickley, Nebraska. To this loving union three daughters were born – Paula, Barbara, and Lynne. Beth and Winton were an active pair, working in and contributing to the life of their Bruning community in many ways. Their family would eventually grow to include three sons-in-law, nine grandchildren, and twenty great-grandchildren – a tally that Beth was always so proud to share. After Winton’s death in 1989, Beth considered herself fortunate to meet the second love of her life, Francis Garrison, of Ohiowa, Nebraska. The two were married on June 21, 1992, and continued a life of love for over 25 years until Francis’s passing in 2018. Beth always said she was blessed to marry two such loving, honorable men. Through the years, Beth always enjoyed visiting with friends and family, playing cards, rooting for her beloved Huskers, and cheering for her kids, grandkids, and great-grandkids at whatever sport or activity they were in. Every card and letter she sent to her family ended with her loving trademark: “I love you so much, so much, so much, so much, so much.” Beth was preceded in death by her spouses, Winton and Francis; her parents, Thurman and Birdeen Apley; and her brothers Rex Curtis Apley and Donald Edwards Apley; and son Darrel Garrison. Those left to mourn her loss include daughter Paula (Duane) Wyssman of Bellevue, Nebraska; daughter Barbara (Jay) Schoenholz of Bruning, Nebraska; daughter Lynne (Mike) Houser of Bruning, Nebraska; sister Janis Apley Frenzen of Geneva, Nebraska; many loving nieces, nephews, and friends; and 29 of the most adored grandchildren and great-grandchildren there ever were. A Funeral Service for Beth was held on Friday, March 19, 2021 at 10:30 a.m. at the United Methodist Church in Bruning, Nebraska. Pastor Jeanie Leeper officiated the Funeral Service. The recorded selections “Precious Lord, Take My Hand,” “Just A Closer Walk With Thee,” and “Jealous Of The Angels” were played during the Funeral Service. Pallbearers included Brian Wyssman, Ken Beukenhorst, Jeff Koehler, Jarred Smith, Patrick Houser, Cody Houser, Mitchell Houser, and Brad Bankson. Honorary Pallbearers included Julie Wyssman, Jenny Beukenhorst, Ami Koehler, Abby Smith, Alissa Bankson, Ashley Perez, and Logan Rosenquist. A Graveside Service was held in the Bruning Public Cemetery following the Funeral Service. Farmer & Son Funeral Home was in care of the arrangements and online condolences can be left at www.farmerandsonfuneralhome.com Memorials are suggested to the Bruning Fire & Rescue Squads.

Bethine Apley Wilson Garrison was born to Thurman G. Apley and Birdeen Edwards Apley on April 18, 1924, on a farm southeast of Bruning, Nebraska. She passed away on March 16, 2021, at the Fillmore County Hospital in Geneva, Nebraska, at the... View Obituary & Service Information

The family of Beth A. (Wilson) Garrison created this Life Tributes page to make it easy to share your memories.