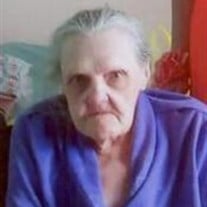 Betty Jean Burklund was born to Jerry Hendrych Sr. and Libbie (Brydl) Hendrych on July 28, 1934 in Milligan, Nebraska, and passed away November 10, 2013 at Exeter Care Center in Exeter, Nebraska at the age of 79 years. She was one of three children in the family. Betty grew up in Milligan, Nebraska where she graduated high school. Shortly after high school, she began working as a waitress at Agnes’s in Milligan. Betty was married to Lloyd Burklund on November 17, 1958 in Concordia, Kansas and to them 1 child was born, Jimmy Lee Burklund in 1959. They moved to Geneva in 1966 where they made their home. Betty lived in Geneva until 2012 when she moved to the Exeter Care Center. Betty enjoyed cooking and had a ton of recipes that she always knew where to find. She also enjoyed crocheting and is known for her famous hand towels that she has made for family and friends. She enjoyed spending time with her grandchildren and her only great grandchild, Brennon. Her cat, Sweety was also a big part in her life. Betty made an extraordinary impact on everyone who met her and she will be greatly missed by many. Betty was preceded in death by her father, Jerry, her mother, Libbie, her husband, Lloyd, her grandson, Jordan Burklund and her beloved cat, Callie. Betty is survived by her son, Jimmy Burklund and his wife, Sherri of Geneva; her brother Jerry Hendrych Jr. and his wife, Carol of Geneva; her sister, Diann and husband John Steyer of Lincoln; her sister, Teresa Smith of Fairbury; her grandchildren, Scott, Charman and Brandon Burklund all of Geneva, her granddaughter, Tiffany Burklund and her great grandson, Brennon Lemke of Lincoln; many nieces and nephews; countless friends and her cat, Sweety. Funeral services for Betty were conducted from Farmer & Son Funeral Home in Geneva, Nebraska on Thursday, November 14, 2013 at 10:00 a.m., with Pastor Karla Sheffy officiating. The recorded selections “Grandma, Watch Over Us All” and “You Raise Me Up” were played during the service. Pallbearers were Scott Burklund, Brandon Burklund, Jerry Hendrych Jr., John Steyer, Frank Schropfer, or Bill Nelson. Graveside services were held following the funeral at the Geneva Public Cemetery with Farmer and Son Funeral Home in charge of arrangements. Memorials are directed to the family.

Betty Jean Burklund was born to Jerry Hendrych Sr. and Libbie (Brydl) Hendrych on July 28, 1934 in Milligan, Nebraska, and passed away November 10, 2013 at Exeter Care Center in Exeter, Nebraska at the age of 79 years. She was one of three children... View Obituary & Service Information

The family of Betty J. Burklund created this Life Tributes page to make it easy to share your memories.

Send flowers to the Burklund family.