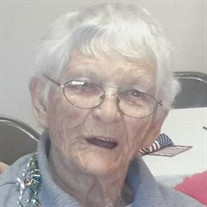 Funeral Services for Betty will be held on Monday, October 3, 2016 at 10:30 a.m. at Grace Lutheran Church in Geneva, Nebraska with Pastor Stephen Kruschel officiating. Visitation will be held on Sunday (10/2/2016) at Farmer & Son Funeral Home in Geneva from 1:00 p.m. until 8:00 p.m. with family being present from 2:00 p.m. until 4:00 p.m. Graveside services will be conducted from the Geneva Public Cemetery following the funeral service at Grace Lutheran Church. Memorials are to be directed to the family for a later designation. Betty J Clark was born to Charles Van Patten and Nellie Foltz Van Patten on August 29, 1924 in Grafton, NE and passed away September 28, 2016 in Geneva, NE. She had just celebrated her 92nd birthday. She was one of 7 children. Betty was married to Robert J Clark of Geneva, NE and to them 4 children were born. Betty was a member of Grace Lutheran Church. Betty spent a good part of her 92 years raising children. She worked at Rainbow World Daycare for over 20 years and finally retired at the age of 80. Before working at the Daycare, Betty spent her entire life watching kids in her home. Her home had an open door for anyone to stop by at any time. She never met a stranger. Since Betty never drove, you’d constantly see her walking her way all over town. It wasn’t uncommon to see Betty going down to the grocery store with multiple kids following obediently behind her. She showed unconditional love to all the kids she raised, but she was not afraid to wash your mouth out with soap if she caught you cursing! To most of us, Betty was Gran…plain and simple, just Gran! There are hundreds of stories to tell about how she lived her life. She was loving and kind yet ornery and serious when involved in a game of pinochle with her brothers. She had family all over the country, so Gran spent a large amount of time traveling. She loved to get on the airplane and go visit her family and friends wherever they may be. She loved to fish and go to garage sales on Saturday mornings usually with a few kids in tow. Her egg sandwiches were second to none. To this day, nobody has made a better one than Gran. She also spent numerous years sharing her faith with children by teaching the Good News Club with Donna Wilkins and Pioneer Club with Dr. Hollis. She was a true giver and never expected nor wanted anything in return but the thousands of smiles on these children’s faces. For many years, her and her husband Bob sponsored a child so they could attend Church Camp. She was the icon of the Clark family and over the years was able to share so many stories and adventures that otherwise may have gone unknown. She will be deeply missed by many people. Betty was preceded in death by her husband, Robert Clark, her parents Charles and Nellie Van Patten, son Robert “Peter” Clark, Jr, sister Nellie Mae “Pat” Graeber, brothers Charles Van Patten, Jim Van Patten, Jack Van Patten, Joe Van Patten and William “Blackie” Van Patten. She is survived by daughter Kathryn “Sally” Miller (Stan) of Geneva, NE, sons Patrick (Amy) Clark of Nikiski, Alaska and Jackie Lee (JoAnn) Clark of Alamogordo, New Mexico, daughter-in-law Carolyn Clark of Clio, Michigan, daughter/niece Bobbie Dee Johnson of Ottawa, Kansas, sister-in-law Shirley Van Patten of York, NE. Betty had 9 grandchildren, 22 great grandchildren and 8 great, great grandchildren as well as numerous cousins, nieces and nephews.

Funeral Services for Betty will be held on Monday, October 3, 2016 at 10:30 a.m. at Grace Lutheran Church in Geneva, Nebraska with Pastor Stephen Kruschel officiating. Visitation will be held on Sunday (10/2/2016) at Farmer & Son Funeral Home... View Obituary & Service Information

The family of Betty J. Clark created this Life Tributes page to make it easy to share your memories.

Funeral Services for Betty will be held on Monday, October 3,...

Send flowers to the Clark family.