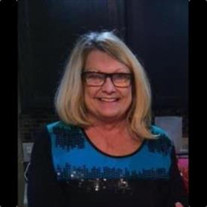 Betty Jean Farmer was born to Albert Benjamin Miller and Violet Ruth (Goodman) Miller on May 28, 1950 in Hebron, Nebraska. She passed away at Heritage Crossings on Wednesday, November 4, 2020 at the age or 70 years, 5 months, 7 days. She was... View Obituary & Service Information

The family of Betty J. Farmer created this Life Tributes page to make it easy to share your memories.

Send flowers to the Farmer family.