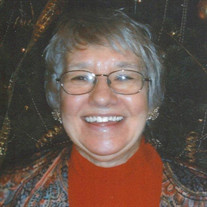 Funeral service for Betty will be 2:00 p.m. Thursday, July 13, 2017 at the Connect Church in Geneva, Nebraska with Pastor Galen Rasmussen officiating. Visitation will be 1 hour prior to the service at the Church. Memorials are directed to the Connect Church. Graveside services will be 1:00 p.m. Friday, July 14, 2017 at the Chapel Hill Gardens Cemetery in Des Moines, Iowa. (4400 Merle Hay Road) Betty Jean Julson was born to Noble Garth Hannah and Helen (Kesler) on June 22, 1937 at Friend, Nebraska, and passed away July 10, 2017 at Bryan Medical Center in Lincoln, NE at the age of 80. Betty was the oldest of three children. Along with younger sister, Bonnie and brother, Clifton Betty enjoyed her childhood at the family farm in Beaver Crossing, NE. After completing her education at Beaver Crossing High School, she married Jerry Fielder. Within the first five years of their marriage they had four children; Cheryl, Jeff, Ray, and Paul. They raised their family in Nebraska and finally settled in Des Moines, Iowa. Betty was a devoted young mother always looking for adventures for her and her young family, even if just in their own backyard. In 1989, Betty married John Julson and they lived happily for two years in Florida before his death in 1991. After John’s passing, Betty eventually returned “home” to Nebraska to care for her elderly mother. Betty’s passion in life was giving of herself, her time, and her testimony to others. She gave the gift of prayer to all who needed it or asked, and she always looked for, and found, answers to her prayers. In particular, Betty prayed for all children, and would ask that we follow in her footsteps. Betty was preceded in death by her parents, her husband, John, and the father of her children, Jerry Fielder. Left to grieve her loss are her children, Cheryl (Bob) Tinsley of Geneva, NE., Jeff (Jackie) Fielder of Norton Shores, MI., Ray (Moni) Fielder of West Des Moines, IA., and Paul (Carla) Fielder of Watertown, MN., 16 grandchildren, and 7 great grandchildren; a sister Bonnie (Arvon) Engel of Colorado Springs, CO., a brother, Clifton (Connie) of Loma, NE., her church family at Connect Church in Geneva, NE.., and many, many dear friends throughout Nebraska and Iowa.

Funeral service for Betty will be 2:00 p.m. Thursday, July 13, 2017 at the Connect Church in Geneva, Nebraska with Pastor Galen Rasmussen officiating. Visitation will be 1 hour prior to the service at the Church. Memorials are directed to the... View Obituary & Service Information

The family of Betty J. Julson created this Life Tributes page to make it easy to share your memories.

Send flowers to the Julson family.