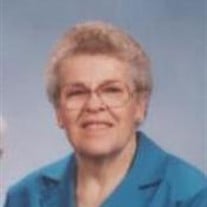 Services for Betty will be Wednesday, November 6, 2013 at 2:00 p.m. at the Trinity Evangelical Lutheran Church in Cordova, Nebraska. Public visitation will begin Tuesday at 1:00 until 8:00 at the Farmer Funeral Home in Exeter, Nebraska with the family greeting friends from 5 until 8. Betty Louise Plettner Jurgensen passed away on Saturday, November 2 , 2013 at Brian LGH in Lincoln, NE at the age of 89 years. She was born in Exeter, NE on October 19, 1924, the 3rd child of John and Nellie (Miller) Plettner. Working at the family produce store and hatchery was her job for during and after high school. She graduated from Exeter High School in 1942. At a dance in Burress, she met the love of her life, Rex Jurgensen. World War II interrupted the romance until she took a train to California where they were married on September 19, 1945. When the war ended they began farming near Cordova, NE. A big surprise in their life came later when her first born child turned out to be two instead of one. Betty always had a large and very well- kept garden that produced countless jars of vegetables. She was known for her immaculate housekeeping, her cinnamon rolls, cookies and the banana cream pies. Betty was a baptized member of Trinity Lutheran Church in Cordova, and a member of the Cordova American Legion Auxiliary. Rex and Betty retired from the family farm by first building a new house in Cordova. After many snowbird trips to Texas they bought a house in Alamo, Texas. Betty and Rex enjoyed the fine weather and the leisurely life style. Advanced age sent them back north where they settled in Stromsburg in 2008. Here Betty read her Bible daily, enjoyed many books, and liked watching birds. She was an avid fan of Nebraska Volleyball and seldom missed watching or listening to the games. Her grandchildren were all very important to her and her new great-grandchildren brought new joy and sparkle to her life. She will be missed and remembered by all of her extended family. Betty was preceded in death by her husband Rex, brothers Karl, John and Joel Plettner, and son-in-law, Frankie Duba. Betty is survived by her sister Eyvonne Clayton of Chico, CA, brother Glen ( Alice) Plettner of Columbus, sister-in law Doris Plettner of Fremont; daughters Janet Duba of Cordova, Joyce (Ben) Votipka of Burress, Donna (Arnie) Hellbusch of Stromsburg; grandchildren , Leslie (Pat) Huggins, Jessica Votipka, Daniel Votipka, Austin (Anne) Hellbusch , Audra Jensen, and 3 great-grandchildren. Interment will be in the Zastrow Cemetery and memorials are directed to the family.

Services for Betty will be Wednesday, November 6, 2013 at 2:00 p.m. at the Trinity Evangelical Lutheran Church in Cordova, Nebraska. Public visitation will begin Tuesday at 1:00 until 8:00 at the Farmer Funeral Home in Exeter, Nebraska... View Obituary & Service Information

The family of Betty L. Jurgensen created this Life Tributes page to make it easy to share your memories.

Send flowers to the Jurgensen family.