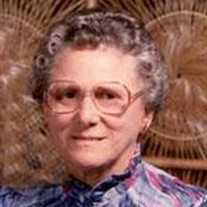 Betty Ann (Soukup) Smetana was born March 13, 1923 on the family farm northeast of Milligan to James and Anna (Svehla) Soukup. On September 23, 2013, she passed away at the age of 90 years, 6 months, and 10 days at the Exeter Care Center. She was one of three children in the family. Betty attended Praire Queen District 48 Country School through the eighth grade and graduated high school in Milligan with the Class of 1940. Betty’s dad took her and her sister Geri to Tabor Hall to a polka dance, where she met Fritz Smetana, and after a short courtship they were married in Marysville, Kansas on December 20,1941. After marriage they lived on several farms and settling for several years on the Evelyn Clark Farm. In 1989, they bought a house in Milligan, in which they were very proud of. This was the first time they had running water and telephone. Betty was a hard worker all her life. On the farm she raised chickens, mowed the lawn and did a lot of baking. She was step for step with Fritz on the farm helping wherever she could. She was very much involved in the farming operation even after Fritz’s passing, and renting of the farm, she would drive out to the farm and inspect the planting, spraying and harvesting. She had a prime seat at her kitchen window during harvest watching the farmers bring in grain. Before Fritz’s passing they enjoyed going to polka dances especially at Pleasant Hill on Sunday evening. Betty also enjoyed going to Ron’s Tavern drinking coffee and visiting with her friends. After her sister Geri’s health began to decline she unselfishly took care of her, and when Geri entered the Exeter Care Center, Betty would go visit her every week and maybe twice a week to take Geri some goodies. Betty celebrated her 90th birthday on March 13, 2013 with a surprise birthday party at Ron’s Tavern with her friends. She said it was her best birthday ever. Betty was preceded in death by an infant sister Dorothy, her parents and parents-in-law, husband, Fritz and brother-in-law Rudy Oliva. She is survived by sister, Geraldine Oliva of the Exeter Care Center, Nephews, Arlan and Eileen Oliva of Scottsdale, AZ, Dennis and Donna Oliva of Milligan, NE, Lambert and Delores Slepicka of Wilber, NE, nieces, Charlotte Sullivan of Norfolk, NE, Evelyn Kantor of Lincoln, NE, great niece, Lindsey and Shane Stone of Hastings, NE, great nephews, Colten and Nathan Oliva both of Milligan, NE and several cousins and host of friends. Funeral services 2 p.m., Thursday, at the Farmer & Son Funeral Home-Kotas Chapel in Milligan, NE. Visitation from 1 p.m. until 8 p.m. Wednesday at the Kotas Chapel in Milligan. Memorials to Milligan Rescue Unit in lieu of flowers. Burial in the Bohemian National Cemetery.

Betty Ann (Soukup) Smetana was born March 13, 1923 on the family farm northeast of Milligan to James and Anna (Svehla) Soukup. On September 23, 2013, she passed away at the age of 90 years, 6 months, and 10 days at the Exeter Care Center.... View Obituary & Service Information

The family of Betty A. Smetana created this Life Tributes page to make it easy to share your memories.

Send flowers to the Smetana family.