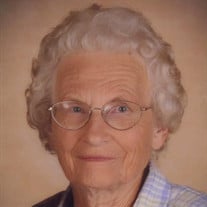 Funeral Services for Betty will be held on Saturday, December 3, 2016 at the Fairmont Community Church in Fairmont, Nebraska at 2:00 p.m. with Pastor Brad Barrows officiating. Visitation will be held on Friday, December 2, 2016 at Farmer & Son Funeral Home in Geneva, Nebraska from 1:00 p.m. until 8:00 p.m. with the family present from 6:00 p.m. until 8:00 p.m. Memorials are to be directed to the Fairmont Community Church Graveside Services will be conducted following the funeral ceremony at the Greenwood Cemetery in York, Nebraska. The Thomsen family would like to invite family and friends to join them in fellowship prior to the funeral service at the Fairmont American Legion Hall for a luncheon starting at 11:00 a.m. Betty Jean (Sluka) Thomsen was born October 20, 1928 to William J. Sluka and Helen (Bures) Sluka in Geneva. She grew up on a farm near Milligan and Ohiowa. She attended school at Dist. #67 in Fillmore County through 8th grade. She attended High School in Geneva and graduated in 1945. She and several other farm girls from the area lived with Mrs. Lillie J. Davis of Geneva during the week and their fathers would take turns driving them home for weekends. Betty attended York College the summer of 1945 and started teaching in the fall. She started teaching when she was 16. She taught in Fillmore Co. Dist. #32 Chelsie and Dist. # 39 through 1949. She was married to Darien E. Thomsen on January 30, 1949 at the Grace Evangelical Lutheran parsonage in Geneva with the Rev. D. Grummert officiating. Because of the extreme snow that winter only four people could attend the wedding. Betty helped Darien on the farm, as well as raising three children. She did upholstery and refinishing of old furniture, as well as sewing, gardening, and canning. She raised chickens and ducks as well. She was a long time member of the Happy Hour Club that began as an Extension Club and just recently disbanded. She volunteer her help on voting day and also helped with the Census several times. She was baptized on May 10, 1964, the same day as her children were baptized at Grace Methodist Church in Fairmont. She attended the Fairmont Community Church until she moved to Heritage in 2012. Betty was preceded in death by parents, brother Irvin Sluka of Milligan, son Steven Lee Thomsen, granddaughter Kari Probasco, and brothers-in-law Dwaine Thomsen and Paul Bulwan. She is survived by her husband, Darien; daughter, Gayla (George) Probasco of Arapahoe, Nebraska; son, Gene (Connie) of Lincoln, Nebraska; sisters-in-law, Olga Sluka of Geneva, Nebraska, Delores Bulwan of York, Nebraska; grandchildren, Todd (Heather) Probasco of Fairmont, Nebraska, Ryan (Lindsay) Probasco of Broomfield, Colorado, Erin (August) Portz of Denver, Colorado, Jennifer Thomsen of Omaha, Nebraska, Jason (Laura) Thomsen of Lincoln, Nebraska and great-grandchildren, Grace, Tripp and Daniel Probasco of Fairmont, Nebraska, Aynslea and Delaney Portz of Denver, Colorado, Avery, Brooke, Haley and Blake Thomsen of Lincoln, Nebraska and cousins, nieces, nephews and many friends.

The family of Betty Jean Thomsen created this Life Tributes page to make it easy to share your memories.

Funeral Services for Betty will be held on Saturday, December...