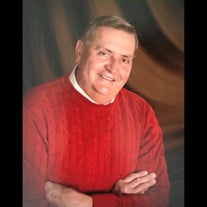 On Thursday, July 23, 2020, Bill Cudaback died at his home at the age of 68 years, 11 months and 12 days surrounded by loved ones after a nine-year battle with lung issues due to rheumatoid arthritis. William (Bill) Cudaback was born on August 11, 1951, in York, Nebraska, the youngest son of Clarence and Agnes (Becker) Cudaback. Bill graduated from Exeter High School with the Class of 1969 and immediately began his life-long passion as a farmer. Straight rows and weed-free fields were his motto. Bill met his wife Judy (Suhr) in 1977 while he was a patient at York General Hospital and she was his nurse. Shy Bill, drawn not only to Judy but also to her yellow sweater, asked for her phone number. Two weeks later, Bill got up the nerve to make his first date call. The result was an evening in York at the only movie choice in town, “Return of a Man Called Horse,” followed by dinner at the Camelot Inn. As life was meant to be, their love grew and they were married one year later on January 27, 1978, in Seward. Bill and Judy made their home and raised their family only one mile south of where Bill grew up outside of Exeter. He enjoyed watching his boys grow up on the farm and was proud to see them mature into the wonderful young men they are today. Bill loved the peace and quiet of country life and took great pride in transforming he and Judy’s farmstead over the years. Bill served on Quad County Coop Board and St. Stephen’s Catholic Church Board and was actively involved in the farm operation until his death. Bill was preceded in death by his parents Clarence and Agnes; and brother-in-law Jeff Suhr. He is survived by his wife Judy (Judith) and their two sons Brandon of Omaha and Chad of Lincoln. Other relatives include brothers and their wives Larry and Bonnie and Roger and Sharon of Exeter; parents-in-law Don and Barb Suhr of Seward; sisters-in-law Deborah Zavitka of Burbank, California, Donna Zigler of Lincoln, Diane Lichty Ringler and husband Rob of Seward; and brother-in-law Mark Suhr also of Seward. Lots of nieces and nephews and their families share memories of Bill as well as friends. A Memorial Mass of Christian Burial for Bill was held on Tuesday, July 28, 2020 at 10:30 a.m. A Rosary was prayed at 10:00 a.m. prior to the Mass at St. Stephen Catholic Church in Exeter, Nebraska. Father Brendan Kelly was the officiant for the Services. Agnes Anderson accompanied the congregation in the singing of “Be Not Afraid,” “Amazing Grace,” “On Eagle’s Wings,” and “Song Of Farewell.” Inurnment was held in the Exeter Cemetery following the Memorial Mass. Farmer & Son Funeral Home was in care of the arrangements and online condolences can be left at www.farmerandsonfuneralhome.com Memorials are suggested to the St. Stephen Catholic Church and the Exeter Fire & Rescue.

On Thursday, July 23, 2020, Bill Cudaback died at his home at the age of 68 years, 11 months and 12 days surrounded by loved ones after a nine-year battle with lung issues due to rheumatoid arthritis. William (Bill) Cudaback was born on August... View Obituary & Service Information

The family of Bill Cudaback created this Life Tributes page to make it easy to share your memories.

Send flowers to the Cudaback family.