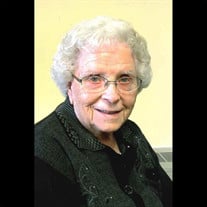 Blanche Anna (Cecrle) Capek was born to Joseph V. Cecrle and Mary M. (Kassik) Cecrle on February 28, 1926 on a farm near Milligan, Nebraska. She passed away on July 25, 2020 at Heritage Crossings Nursing Home in Geneva, Nebraska at the age of 94 years, 4 months, and 27 days. Blanche attended School District #39 as a youth. She then attended Ohiowa High School her Freshman and Sophomore years before transferring to Milligan High School for her Junior and Senior years, graduating with the class of 1943. She taught country school for two years at District #32 and #65. Blanche married Joseph G. Capek on October 8, 1946 in Clay Center, Nebraska. They lived on a farm ¾ of a mile south of Milligan, until they built a house in January of 1986 and moved into Milligan. To this union, three children were born: Randall Gene, Larry Joel, and Jo Ann. Joe and Blanche loved to dance and went on many bus trips to dances. They also liked to travel, especially enjoying trips to Hawaii and to the Czech Republic to visit relatives. Blanche was involved in many organizations. She worked with the Blood Mobile for 28 years, and she was a lifetime and continuous member for 74 years with the Milligan American Legion Auxiliary. She was also a member of the Milligan Jrs. Extension Club, she helped with Grassland Day for many years, she was a 4-H leader and Jr. Auxiliary Leader, and she was a member of the Milligan United Methodist Church. She had a fondness for her cats and she especially loved Quincy and Ralphie. Blanche was preceded in death by her parents; husband Joe; siblings Rudy, Emilye, Joe, Elsie, Rose, and MaryAnn. She is survived by her children Randy Capek and wife, Lana of Tobias, Nebraska, Larry Capek and wife Adrienne of Milligan, Nebraska, Jo Capek of Lincoln, Nebraska; seven grandchildren, 10 great grandchildren, three step great grandchildren; sister-in-law Lucille Capek of Milligan, Nebraska and many nieces and nephews. A Funeral Service for Blanche was held on Friday, July 31, 2020 at 10:30 a.m. at the United Methodist Church in Milligan, Nebraska. Pastor Murry Johnston officiated the services. Karen Kohler provided the prelude and postlude music and she also accompanied the congregation in the singing of “Hymn Of Promise.” Recorded selections, “Cowboy’s Sweetheart” and “Supermarket Flowers” were played for the processional and recessional music. Pallbearers included Patrick Capek, Logan Capek, Dana Sperling, Brandon Cutler, David Brown, Grant Anderson, Chris Krueger, Jordan Uldrich, and Royce Capek. Honorary pallbearers included LaDawn Sperling, Tamara Cutler, Raegan Brown, Chelsey Anderson, Jordan Krueger, Traci Uldrich, and Ralphie the Cat. Interment was held in the Bohemian National Cemetery following the Funeral Service. Farmer & Son Funeral Home was in care of the arrangements and online condolences can be left at www.farmerandsonfuneralhome.com Memorials are suggested to the Milligan Legion Auxiliary, Milligan Fire & Rescue, or the United Methodist Church in Milligan.

Blanche Anna (Cecrle) Capek was born to Joseph V. Cecrle and Mary M. (Kassik) Cecrle on February 28, 1926 on a farm near Milligan, Nebraska. She passed away on July 25, 2020 at Heritage Crossings Nursing Home in Geneva, Nebraska at the age... View Obituary & Service Information

The family of Blanche Anna Capek created this Life Tributes page to make it easy to share your memories.