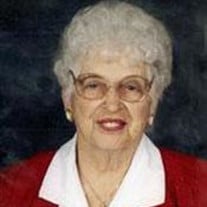 Blanche Marie Havel was born on July 22, 1916 to Joseph and Anna (Dlouhy) Herynk on the family farm near Tobias, NE. She passed away on Monday, September 23, 2013 in Long Beach, California at the age of 97 years, 2 days, and 1 month. Blanche grew up in the Tobias area and graduated from Tobias High School in 1934. Following graduation, she briefly taught in nearby rural schools. During this time, she met her future husband, Emil Richard Havel, at a dance in Milligan, Nebraska. She married Emil in Long Beach, CA, in June 1939, after his tour of duty in the Navy. Though they lived in California, they made annual trips to visit family and friends in their hometowns. Blanche was active for many years in singing groups, church organizations, and bowling leagues. She spent much time enjoying her backyard filled with roses and flowers and birds. She was preceded in death by her husband of 48 years, Emil; her parents, Joesph Herynk and Anna (Dlouhy) Herynk; and her sisters, Agnes Kassik, Emily Novak, Ann Crays, and Allene Tesar. She is survived by her sons, Gary and wife Ginger of Long Beach, CA and Richard and wife Kathlene of Agoura Hills, CA; and three granddaughters, Cherise Moss of Mesa, Arizona. Lindsey Souther of San Diego, California and Kelly Havel of Sherman Oaks, California. A Funeral Mass for Blanche was held on Monday, September 30, 2013 at 10:00 a.m. at the St. Wenceslaus Catholic Church in Milligan, NE. Father David Bourek officiated the services. Karen Filipi played “Here I Am Lord’, “Going Home” and “Lord, When You Come To The Seashore.” Pallbearers for the service included Donald Crays, Gene Smith, Richard Kassik, Lavern Novak, Glen Soukup, and Allen Soukup. Interment was held in the Bohemian National Cemetery. Farmer & Son Funeral Home was in charge of the arrangements. Memorials are directed to the

Blanche Marie Havel was born on July 22, 1916 to Joseph and Anna (Dlouhy) Herynk on the family farm near Tobias, NE. She passed away on Monday, September 23, 2013 in Long Beach, California at the age of 97 years, 2 days, and 1 month.... View Obituary & Service Information

The family of Blanche Marie Havel created this Life Tributes page to make it easy to share your memories.

Send flowers to the Havel family.