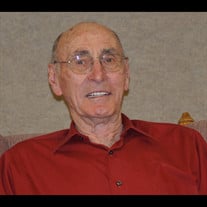 Bobby Gene Anderson was born to Eugene Leroy Anderson and Eleanor Eva (Koch) Anderson on December 31, 1934 at home in Shickley, Nebraska, and passed away on May 30, 2018, at his home in Geneva, Nebraska at the age of 83 years, 4 months, and 29 days. He was one of 3 children born in the family. Bob grew up on a farm between Shickley and Ong. He attended elementary school in Shickley and graduated from Ong High School with the class of 1952. He attended 1 year of college at the University of Nebraska in Lincoln, studying agriculture and participating in ROTC. Bob married the love of his life, Mariann Eppler, on December 26, 1953 at the Grace Lutheran Church in Ohiowa, Nebraska. To this union 6 children were born. Bob and Mariann farmed near Shickley for 23 years. He also worked part time at the ASCS office in Geneva and drove truck for Saltzman Brothers Trucking in Shickley during this time. In 1976, the family moved to Shickley when Bob became a farm equipment salesman for John Deere. He retired from John Deere in 2002. Bob and Mariann moved to Geneva in 2013. Bob was a lifelong member of the Zion Lutheran Church in Shickley, serving on numerous church committees. He was also a member of the Fillmore County Extension Board, a 4-H leader, and an avid hunter. He especially loved hunting with his boys. Sports were also a very important part of Bob’s life, and he instilled this love of sports in his children and grandchildren. He enjoyed competing, coaching, and in later years just watching sports. Bob’s greatest joy was watching any activity that his children and grand children were involved in. In 2015, Bob was named the Fillmore County Fan of the year. He also enjoyed working in his yard and spending time in his shop, making things for family. Through out his employment with John Deere, Bob and Mariann enjoyed traveling to the Bahamas, New Orleans, California, Italy and other convention sites where they made many friends along the way. Bob was preceded in death by his parents Eugene & Eleanor; parents-in-law Virgil & Norma Eppler; brother-in-law Roger Bates; and sisters-in-law Bonnie Nun and Leah Anderson. He is survived by his wife Mariann of Geneva; children Deb (Carm) Gross of Shickley, Nebraska, Bill (Lori) Anderson of Seward, Nebraska, Peg (Martin) Koopman of Scribner, Nebraska, Kathy (Dave) Lange of Elkhorn, Nebraska, Gary (Regina) Anderson of Hastings, Nebraska, Nancy (Charles) Fleck of Denton, Nebraska; 17 grandchildren, 5 step-grandchildren, and 13 great grandchildren; sister Jenice Bates of Syracuse, Nebraska; brother Dick Anderson of Edmond, Oklahoma; brother-in-law Mel (Norma) Nun of Loup City, Nebraska; and sister-in-law Connie Eppler of Lincoln, Nebraska. A Funeral Service for Bob was held on Saturday, June 2, 2018 at 10:30 a.m. at Zion Lutheran Church in Shickley, Nebraska. Pastor James Moll officiated the service. Stanley Johnson accompanied the congregation in the singing of “Beautiful Savior, “ “I Am But A Stranger Here,” and “Amazing Grace.” He also accompanied Bob’s great grandchildren in singing “Jesus Loves Me.” Pallbearers for the service included Jason Gross, Doug Gross, Tim Gross, Mitch Anderson, Cory Anderson, Travis Anderson, Tyler Anderson, Bret Lange, Jared Fleck, Trevor Fleck, and Corey Fleck. Honorary pallbearers included Natalie Meyer, Danae Eitzmann, Alicia Schmidt, Kristin Lange, Lizzie Lange, Lexi Anderson, Gracie Anderson. A Graveside Service was held in the Shickley Public Cemetery following the Funeral Service. Farmer & Son Funeral Home of Geneva conducted the services and online condolences can be left at www.farmerandsonfuneralhome.com Memorials in lieu of flowers are directed to the family for future designation.

Bobby Gene Anderson was born to Eugene Leroy Anderson and Eleanor Eva (Koch) Anderson on December 31, 1934 at home in Shickley, Nebraska, and passed away on May 30, 2018, at his home in Geneva, Nebraska at the age of 83 years, 4 months, and... View Obituary & Service Information

The family of Bob Anderson created this Life Tributes page to make it easy to share your memories.