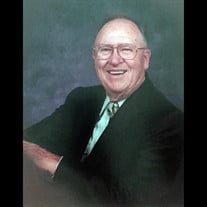 Bob Burton Marsh was born to Bert B. & Beulah D. (Amos) Marsh on September 12, 1925 at Sargent, Nebraska, and passed away on November 29, 2018, at the Independence House in Lincoln, Nebraska at the age of 93 years, 2 months, and 17 days. He was one of 3 children born in the family. Bob attended country school northwest of Sargent through the 8th grade. As a teenager, he broke horses and drove a livestock truck before starting a farm store in Milligan in the mid 1940’s. Bob was married to Nona Bulin on December 4, 1944 and three children were born to this union: Joan, Peggy, and Robert. They moved to Exeter in the 1950’s and stayed with the farm store until 1969. They then moved to York, Nebraska and Bob maintained employment with the M&M Farm Store. In 1970, they moved to Hastings and purchased a Drive-In Package Store from his uncle. In 1992, Bob sold the store and retired. Nona passed away on October 30, 1986 and Bob remarried Merlene Crossfield on July 13, 1991. They spent 27 years together. Throughout his life, Bob enjoyed hunting, fishing, woodworking, and small engine repair. Bob was preceded in death by his parents Bert & Beulah Marsh; sister Waunita Russell; first wife Nona Marsh; and step son-in-law Mark Connealy. He is survived by his wife Merlene of Rogers, Nebraska; daughters Joan & Ron Ruhl of Exeter, Nebraska, Peggy Marsh of Hastings, Nebraska; son Robert & Janelle Marsh of Malcolm, Nebraska; sister Twila Bowley of Ord, Nebraska; step-daughters Diane Rossow of Denver, Colorado and Karen Connealy of Rogers, Nebraska; 4 grandchildren, 5 step grandchildren, 6 great grandchildren, 3 step great grandchildren, and 2 step great great grandchildren. A Graveside Service was held for Bob on Tuesday, December 4, 2018 at 1:30 p.m. at Exeter Cemetery in Exeter, Nebraska. Monsignor Daniel Seiker officiated the service. Memorials are suggested to the American Diabetes Association, 2451 Crystal Drive, Suite 900, Arlington, VA 22202 or the Alzheimer's Association, 225 N. Michigan Ave., Fl. 17, Chicago, IL 60601. Farmer Funeral Home of Exeter was in care of the arrangements, and online condolences can be left at www.farmerandsonfuneralhome.com.

The family of Bob B. Marsh created this Life Tributes page to make it easy to share your memories.

Send flowers to the Marsh family.