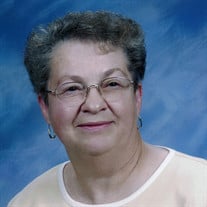 A Memorial Graveside Service for Bonnie will be held on Thursday, June 6, 2019, at 11:00 a.m. at the Geneva Public Cemetery with Pastor Doug Griger presiding. No visitation - cremation. In Lieu of Flowers - Memorials are to be directed to the family for a later designation. Bonnie Jean Heath was born to Hubert Herman Koehn and Helen (Girmus) Koehn on May 16, 1944, in York, NE, and passed away on May 29, 2019, at Windcrest Assisted Living in Lincoln, NE, at the age of 75. She was the second oldest of 6 children. Bonnie was raised on a farm near Grafton, NE. She attended school at Sutton High School and Fairmont High School. She was married to Ronald Gene Heath of Geneva, NE, on November 25, 1961, in Geneva. To this union three sons were born: Clayton James, Brian Lee, and Bradley Allen. From 1961 to 1982, Ron and Bonnie lived in Geneva, NE. While being a stay at home mother, Bonnie worked on her GED and was a typesetter for the Nebraska Signal. In 1982, Ron was transferred to Hershey, PA. While in Pennsylvania, Bonnie worked a variety of jobs before working as a typesetter for the Patriot in Harrisburg, PA. In 1989, Ron and Bonnie moved to Horseheads, NY. After moving to Horseheads, Bonnie suffered her first stroke and began the long road to recovery to regain her independence by learning to walk, talk, read and write again. In 1992, Ron passed away and Bonnie returned to Geneva, NE, where she built her own home. She lived in Geneva until 2007, when she then moved to Lincoln, NE, to be closer to family. Bonnie enjoyed a variety of social activities throughout the years including being a member of the United Methodist Church in Geneva, NE, joining in 1961. She was also a member of the Women of the Moose in Horseheads, NY, was a past member of the Suburbanite Extension Club, and did volunteer work at the Senior Center while living in Geneva. Bonnie also spent many enjoyable hours following her sons and grandchildren’s activities and was an avid Husker and Royals fan. Bonnie enjoyed crafts of all kinds including creating beautiful quilts, sewing clothes for her grandchildren, as well as knitting, crocheting, card making, and stamping. Bonnie also enjoyed expanding her collection of tea pots and American Girl dolls. Above all, she enjoyed spending time with her family, especially her grandchildren who she loved very much. She also enjoyed traveling with her sisters when she was younger and visiting her sons and their families in Tennessee in later years. Bonnie was preceded in death by her parents, Hubert and Helen Koehn; her brothers, James and Leon Koehn; her husband, Ron Heath; brother-in-law, Butch Schall; sister-in-law, Roine (Heath) Anderson; brother-in-law, Rodger Anderson; nephews, Ronald and Rodney Anderson; and grandson, Seth Crawford. Bonnie is survived by sons Clayton Heath and wife Wendy of Lincoln, NE, and their daughters Charli, Jami and Jami’s fiancé Peter Nguyen; Brian Heath and Laresha Bland of Nashville, TN, his son Brady and their daughter Celia; Bradley Heath of Dickson, TN, and his children Josh Crawford, Alicia Heath (James Sutton) and their son Brayden; sisters, Judy Gibson of Lincoln NE, Karen Schall of Pierce, NE, and Sharon and Dennis Bossen of Damascus, OR; sister-in-law, Ardis Koehn of Lincoln, NE; and her many nieces and nephews.

A Memorial Graveside Service for Bonnie will be held on Thursday, June 6, 2019, at 11:00 a.m. at the Geneva Public Cemetery with Pastor Doug Griger presiding. No visitation - cremation. In Lieu of Flowers - Memorials are to be directed to... View Obituary & Service Information

The family of Bonnie J. Heath created this Life Tributes page to make it easy to share your memories.

A Memorial Graveside Service for Bonnie will be held on Thursday,...

Send flowers to the Heath family.