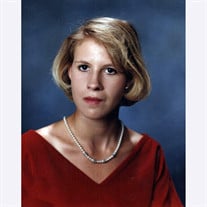 Funeral services for Bonnie will be held on Tuesday, October 21, 2014 at 2:00 p.m. at the First Congregational United Church of Christ in Geneva. Pastor Diane Ryder will officiate the services. Graveside services will follow the funeral in the Geneva Public Cemetery. Visitation will be on Monday from 1:00 p.m. to 8:00 p.m. at the Farmer & Son Funeral Home in Geneva. Memorials are directed to the family to be designated later. Bonnie Auneta Howell was born to James Roger Bohannon and Betty Loretta (Mosteller) Bohannon on July 11, 1977 in Sheridan, Wyoming. She passed away on October 16, 2014 at her home near Geneva, Nebraska at the age of 37 years, 3 months, and 5 days. She was one of three children born in the family. Bonnie began her life in Wyoming, living there until the family moved to Texas in 1980. The family lived in various places throughout Texas, and Bonnie graduated from Benjamin high school with the class of 1996. Upon graduating high school, Bonnie attended EMT school and also worked as a waitress. In 1999 while living in Knox City, Texas, Bonnie met Craig Howell. Craig and Bonnie were married on January 1, 2005 in Knox City. To this union, one child was born, Cutter Howell. Bonnie’s other two children, Taylor and BayLee, welcomed Cutter into the family. Bonnie and Craig move from Texas to Lockwood, Missouri before locating in Craig’s hometown of Geneva, Nebraska. It was easy to see what was important in Bonnie’s life, as her love for her children and family was very evident. They were the most important things in her life. Bonnie was raised in the First United Methodist Church in Benjamin, Texas. Bonnie is survived by her husband, Craig, of Geneva, Nebraska; her parents James & Betty Bohannon of Benjamin, Texas; children Taylor Bohannon, BayLee Bohannon, Cutter Howell , and niece Sabra Bohannon all of Geneva, Nebraska; brother Lonnie Bohannon; sister Jamie and husband Tyler Ford; nieces & nephews Chance & Chase Bohannon, Nicholas, Lez’leigh, and Josh Brumely; mother-in-law Wanda Howell; brothers-in-law Carl Howell and wife Angie and their daughter Alex, Kurt Howell, C.L. Howell and wife Holly, and their daughter Jaci.

Funeral services for Bonnie will be held on Tuesday, October 21, 2014 at 2:00 p.m. at the First Congregational United Church of Christ in Geneva. Pastor Diane Ryder will officiate the services. Graveside services will follow the funeral... View Obituary & Service Information

The family of Bonnie A. Howell created this Life Tributes page to make it easy to share your memories.

Funeral services for Bonnie will be held on Tuesday, October...

Send flowers to the Howell family.