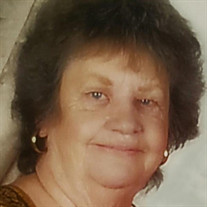 A Funeral Service for Bonnie will be held on Monday, March 8, 2021 at 11:00 a.m. at Trinity Lutheran Church in Bruning, Nebraska with Pastor Stuart Sell presiding. Visitation will be held on Sunday, March 7, 2021 at Farmer & Son Funeral Home in Geneva, Nebraska from 3:00 p.m. until 8:00 p.m. with family present from 5:00 p.m. until 7:00 p.m. Graveside Services will be conducted at the Bruning Public Cemetery in Bruning, Nebraska following the funeral service. Memorials are to be directed to the family to be designated at a later date. Bonnie Jean Hulse was born to Melvin and Gladys (Schelbitzki) Dittmer on November 8, 1939, at Bruning, Nebraska and passed away on Monday, March 1, 2021, at Green Valley, Arizona at the age of 81 years, 3 months and 23 days. She was the oldest of two children. Bonnie was baptized at the South Lutheran Church in Ohiowa, Nebraska and confirmed at Trinity Lutheran Church in Bruning, Nebraska. She attended country school through grade school and was a graduate of Bruning High School with the class of 1957. On December 19, 1959, Bonnie married LeRoy Hulse in Bruning, Nebraska. From this union three children were born. Bonnie and LeRoy began their married life living in California and then moved back to Bruning. They operated the West Side Café in Geneva and ran the business for several years before selling the café. After that they made their home in Ohiowa, Nebraska for a year before packing up and moving to Iowa. She worked several different jobs. One of the jobs she held was at the Mills County Courthouse in the Treasurer’s Office. Bonnie and LeRoy bought a farm south of Glenwood, Iowa where they lived and farmed. After retiring, and selling the farm, Bonnie and LeRoy moved back to Bruning, Nebraska where they made their home other than when they would leave in the winter and preside in Arizona. Bonnie enjoyed gardening, crocheting, cribbage, camping and fishing. She loved to spend time with her children, grandchildren and great-grandchildren. Garage sales and auctions were also a passion she enjoyed. Bonnie was preceded in death by her parents, Melvin and Gladys Dittmer and brother, Jerry Dittmer. She is survived by her husband, LeRoy Hulse of Bruning, Nebraska; Daughter, Kim (Neil) Houser of Malvern, Iowa; sons, Kelly (Michelle) Hulse of Sahuarita, Arizona and Kent (Barbara) Hulse of Olathe, Kansas; grandchildren, Ivan Houser, Marcus Houser, Jason Houser, Brandi Mott, Shaya Roesler, Eric Hulse and Andrea Hulse; great-grandchildren, Breelynn Houser, Grayson Houser, Sadie Houser, Brayden Houser, Tyler Houser, Cameron Houser and Skyllar Bolte; and aunt, Ione Schelbitzki of Geneva, Nebraska.

A Funeral Service for Bonnie will be held on Monday, March 8, 2021 at 11:00 a.m. at Trinity Lutheran Church in Bruning, Nebraska with Pastor Stuart Sell presiding. Visitation will be held on Sunday, March 7, 2021 at Farmer & Son Funeral Home... View Obituary & Service Information

The family of Bonnie J. Hulse created this Life Tributes page to make it easy to share your memories.

A Funeral Service for Bonnie will be held on Monday, March 8,...

Send flowers to the Hulse family.