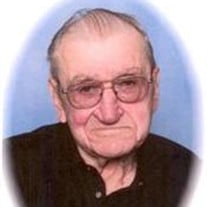 Funeral services will be on Wednesday, August 10, 2011 at 2:00 p.m. at the Salem Mennonite Church with Pastor Shawn Nolt officiating. Burial will follow the services in the Salem Cemetery. Visitation will be held at Farmer & Son Funeral Home in Geneva on Tuesday from 1:00 p.m. to 8:00 p.m. Memorials are directed to the Salem Mennonite Church. Boyd Henry Schweitzer of Hebron was born to William and Pauline (Noel) Schweitzer on December 31, 1918 near Carleton, NE. He passed away on Sunday, August 7, 2011 at the age of 92. Boyd accepted Christ as his personal savior in his youth. He was baptized, and joined Salem Mennonite Church near Shickley. Boyd was the eldest of five children. He attended a country school through the eighth grade. His desire was to continue his education, but he had to quit school to help his dad on the farm. He worked hard throughout his life so that his children would have the opportunity to attend college. On December 19, 1945 Boyd married Laurine Lichti of Bruning. Their marriage was blessed with a son, Royce, a daughter, Trudy, seven grandchildren, and five great-grandchildren. Boyd and Laurine moved to a farm in Fillmore County. They lived in the Shickley vicinity where they farmed until 1975 when they moved to Bruning for his employment with the Village of Bruning. Boyd's greatest joy in life was being with his children, grandchildren and great-grandchildren. When everyone was together, you would see Boyd silently listening and enjoying all of his family. He often told Laurine that the good Lord blessed them with good kids and grandkids. Boyd is preceded in death by his parents, brother Lyle, sister Ruth Swartzendruber, five brother-in-laws and three sister-in-laws. Boyd is survived by his wife Laurine, son Royce of Henderson, and daughter Trudy Kassebaum and husband Rick of Hebron. Four granddaughters Giselle (Schweitzer) Bray of San Diego, CA, Carisa (Schweitzer) Masek and husband Jerome of Ceresco, Rachelle Schweitzer of Henderson, and Shauna (Kassebaum) Rodine and husband Drew of Seward. Three grandsons Derek Schweitzer and wife Sarah of Kearney, Bret Schweitzer of Lincoln, and Kyle Kassebaum and wife Jami of Lincoln. Five great-grandchildren Veronica and Corinna Bray of San Diego, CA, Morgan and Josilyn Masek of Ceresco, and Kade Kassebaum of Lincoln. Sisters Doris Lichti of Geneva and Carol Bruning and husband Stan of Geneva. Two sister-in-laws and many nieces and nephews.

Funeral services will be on Wednesday, August 10, 2011 at 2:00 p.m. at the Salem Mennonite Church with Pastor Shawn Nolt officiating. Burial will follow the services in the Salem Cemetery. Visitation will be held at Farmer & Son Funeral... View Obituary & Service Information

The family of Boyd H. Schweitzer created this Life Tributes page to make it easy to share your memories.