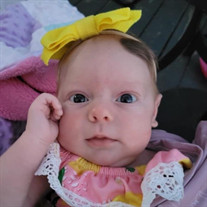 A Funeral Service for Briella will be held on Thursday, June 17, 2021 at 10:30 a.m. at the United Methodist Church in Geneva, Nebraska with Pastor Doug Griger presiding. A Private Visitation for family and close friends will be held on Wednesday, June 16, 2021 from 3:00 p.m. until 5:00 p.m at Farmer & Son Funeral Home in Geneva, Nebraska. Graveside Services will be conducted following the funeral service at the Geneva Public Cemetery in Geneva, Nebraska. Memorials are to be directed to the family to be designated at a later date. Briella Katelyn Chaney blessed this world on April 28, 2021. She was born to Brett & Rachel Chaney of Geneva, Nebraska and was welcomed home by two older brothers, Braylon & Grayson. She left this world gently into the arms of Jesus, while surrounded by her family, on June 11, 2021, at Children’s Hospital, in Omaha, Nebraska, after a brief illness, at the age of 6 weeks and 2 days. Briella brought joy and happiness to everyone she touched. During her short visit on earth, she enjoyed nursing time, soft blankets, showing off her dimples, her binky, dressing up in big bows, snuggles from her brothers, kisses from Hunter-dog, and being held close by her family and friends. She was baptized at Children’s Hospital on June 9, 2021. She was the answer to her parent’s prayers. She was a little miracle, as she was conceived through an IVF embryo transfer, and she completed her family. Briella is survived by her parents: Brett and Rachel Chaney and brothers, Braylon and Grayson of Geneva Nebraska; Paternal grandparents: Mike and Katie Chaney of Geneva, Nebraska; Maternal grandparents: Rick and Lori Sheehan of Friend, Nebraska; Uncle: Drew Chaney and cousins: Jackson and Brooke of Geneva, Nebraska; Uncle: David Sheehan of Greenwood, South Carolina; Aunt: Sarah and Kelvin Mitchell and cousin: Wilder of Friend, Nebraska; and Great-grandmother: Pat Chaney of Syracuse, Nebraska. Briella is preceded in death by her great-grandparents: Glenn and DeeAnn Schwisow, Richard Chaney, Lee and Ann Roth, and Dick and Betty Sheehan. Briella was loved by all who met her, and will be greatly missed… and to think, the first thing she saw when her little eyes opened was the face of Jesus.

A Funeral Service for Briella will be held on Thursday, June 17, 2021 at 10:30 a.m. at the United Methodist Church in Geneva, Nebraska with Pastor Doug Griger presiding. A Private Visitation for family and close friends will be held on Wednesday,... View Obituary & Service Information

The family of Briella Katelyn Chaney created this Life Tributes page to make it easy to share your memories.

A Funeral Service for Briella will be held on Thursday, June...