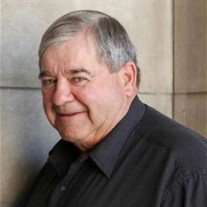 Bernard Bruce Nedrow was born on December 8, 1941, at his home in Davenport, Nebraska to Robert and Elva (Dubois) Nedrow. He passed away on July 28, 2019, peacefully at his home, surrounded by his loved ones, at the age of 77 years, 7 months and 20 days. He was one of three children in the family. Bruce attended Shickley High School and graduated in 1959. During high school, he loved to play football and basketball. He then journeyed to Lincoln where he attended the University of Nebraska. He was a member and the Chapter President of the Alpha Gamma Sigma Fraternity where he made many friends. He graduated in 1963 with a Bachelor's Degree in Mechanized Ag. During his senior year of high school, he met the love of his life- Donna Shuster from Geneva, Nebraska. Bruce and Donna were married on February 23,1963. They established their first home in Shickley, Nebraska. Donna taught at the Shickley Elementary School and Bruce farmed with his father, Robert Nedrow. To this union, three children were born - Lori Marie, Kristi Ann and Brian Bruce. Bruce and Donna then moved to a home located just at the edge of the Fairmont Air Base. Bruce farmed the acres surrounding the Air Base area. In 1982, Bruce and Donna moved to a home just outside of Geneva, Nebraska, where Bruce lived until his death. Bruce helped build this house with his friend, Larry Miller, from Fairmont. Bruce's passion in life was farming. He worked very hard and over the years he grew his farming operation and acquired land in Fillmore and Thayer Counties. He was always happiest when planting his fields, irrigating his crops and doing any farm project. Harvest was his favorite time of the year. The annual Family Corn Day (Sweet Corn Festival termed by his granddaughter Lauren Pavel) was a highlight in Bruce's life. Every year he planted a big patch of sweet corn just so all the family members could spend the day together shucking, cleaning and freezing the corn for all to enjoy. Bruce found other interests outside of farming. These included his love for Cornhusker football and baseball games, flying in his Cessna airplane, camping and boating. A special place for the family was the Lake of the Ozarks where numerous special memories were created. In addition to his farming operation, Bruce sold Hogemeyer Seed Corn and Archer Oil. He also enjoyed driving his semi truck to haul pivots for Valley Irrigation. Bruce and Donna enjoyed many travels during their time together. Some of their favorite destinations included Brazil (for a soybean tour), Australia, Alaska, Hawaii, Mexico, Canada and a Rhine River Cruise in Germany. They also enjoyed visiting many places in the United States including California, Florida, Arizona and Texas. Bruce was part of a special group of guys that enjoyed going to Chicago Cubs Games to watch their favorite player, Mark Grace, who they were family friends with. Bruce was also involved in the community by serving on the Hidden Hills Country Club Board, the Fillmore County Bank Board, and he was a member of the Geneva Lions Club. Bruce was blessed with six wonderful grandchildren. He was a devoted grandfather who always enjoyed giving combine and tractor rides to the kids and having them out to the field for harvest lunches. Bruce was their biggest fan as he cheered them on at their many sporting activities. Bruce was preceded in death by his parents Robert and Elva (Dubois) Nedrow; his in-laws, Helen & Leslie Shuster; and his sister-in-law, Bonnie Nichols. He is survived by his wife of 56 years Donna (Shuster) Nedrow of Geneva, Nebraska; his children Lori Rasmussen and husband Pat of Geneva, Nebraska, Kristi Pavel and husband Scott of Ashland, Nebraska, Brian Nedrow and wife Nicole of Geneva, Nebraska; his six grandchildren Brooke Rasmussen, Nate Rasmussen, Lauren Pavel, Luke Pavel, Kali Nedrow and Cole Nedrow; sisters Jeanette Stengel and husband Dan of Joplin, Missouri and Nancy Barber and husband Don of Fairbury, Nebraska; and nieces and nephews. A Funeral Mass for Bruce was held on Thursday, August 1, 2019 at 10:30 a.m. at St. Joseph Catholic Church in Geneva. Father Harlan Waskowiak and Father Michael Oluka were Celebrants for the Mass. Charlotte Bumgarner accompanied and Becky Elznic led congregation in the singing of “Here I Am Lord,” “Be Not Afraid,” “I Am The Bread Of Life,” and “Song Of Farewell.” Charlotte also accompanied Becky Elznic in the singing of “On Eagles’ Wings.” Pallbearers for the service included Brooke Rasmussen, Nate Rasmussen, Lauren Pavel, Luke Pavel, Kali Nedrow, and Cole Nedrow. A Private Family Graveside Service was held in the St. Joseph Catholic Cemetery. Farmer & Son Funeral Home was in care of the arrangements and online condolences can be left at www.farmerandsonfuneralhome.com. Memorials are suggested to the St. Joseph Catholic Church, Fillmore Central FFA, or the Geneva Community Center Building Project.

Bernard Bruce Nedrow was born on December 8, 1941, at his home in Davenport, Nebraska to Robert and Elva (Dubois) Nedrow. He passed away on July 28, 2019, peacefully at his home, surrounded by his loved ones, at the age of 77 years, 7 months... View Obituary & Service Information

The family of Bruce Nedrow created this Life Tributes page to make it easy to share your memories.

Send flowers to the Nedrow family.