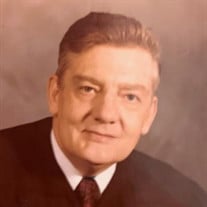 Carl Olaf Bue, Jr., a retired judge of the U.S. District Court in Houston, died peacefully at his home on Thursday, the 24th of December, 2020. He was 98 years of age. He was renowned throughout the legal community for his dignified judicial temperament, legal scholarship, and strict adherence to and respect for the rule of law. Born in Chicago, Illinois, in 1922, he was the only child of Carl O. Bue, Sr. and Mabel Port Shollar Bue. In 1940, he graduated cum laude from Shattuck School, a military prep school in Faribault, Minnesota, as Cadet Major, the first officer in the military Corps of Cadets, achieving a rank that was a precursor of the leadership, character, and passion for learning that he displayed throughout his adult life. After graduation, he attended The University of Chicago on an honor scholarship, graduating in 1942 with an A.A. degree. He was called to active military duty immediately thereafter and served four years in the U.S. Army, including three years in the Mediterranean Theater of Operations in North Africa and Italy during World War II. He was discharged as a Captain in the Adjutant Generals Corps in 1946, and enrolled in law school at The University of Chicago, following a year studying Italian in Rome, Italy. Although a service-related illness forced him to withdraw from law school, he later enrolled in Northwestern University, graduating in 1951 with a Ph.B degree. Moving to Texas in 1951, he enrolled in The University of Texas School of Law, where he was on the winning team of the annual Hildebrand Moot Court Competition arguing before the Supreme Court of Texas. Upon his graduation in 1954 with a J.D. degree, he joined the prestigious maritime law firm of Royston and Rayzor in Houston, becoming a partner in 1958. While in private practice, he engaged in trials and appeals in both state and federal courts, taught admiralty law at South Texas College of Law, and lectured at numerous other law schools and legal seminars. He wrote articles for law reviews and other legal publications, the most significant of which is the two-part analysis, “Admiralty Law in the Fifth Circuit, A Compendium for Practitioners” published in the Houston Law Review. In 1970, President Richard Nixon appointed Carl Bue a United States District Judge for the Southern District of Texas, where he served for 17 years before retiring in 1987. For his handling of the protracted Harris County jail litigation, he was awarded the Chief Justice Joe R. Greenhill Award as the outstanding jurist in contributing to the judicial process in Texas. Judge Bue was well known for his many published opinions in complex litigation. He viewed as one of the responsibilities of his position the obligation to train the new lawyers who were his law clerks to become lawyers of the highest caliber, many of whom kept close contact with him for decades after their clerkships ended. In 1988, the Judge Carl O. Bue, Jr. Endowed Presidential Scholarship in Law was established in his honor at The University of Texas School of Law by his law clerks, colleagues, family, and former law firm. In 1975, he was awarded the Good Citizenship Medal by the Houston chapter of the Sons of the American Revolution. In 1997, he was awarded the Northwestern University Merit Award for distinguished service in the law reflecting credit on the university. Judge Bue was a member of Memorial Drive United Methodist Church in Houston; Alpha Delta Phi fraternity; Phi Alpha Delta legal fraternity; the American, Texas, and Houston Bar Associations; the Maritime Law Association of the United States; and the Houston Philosophical Society at Rice University. Following his retirement, he and his wife, Mary, traveled extensively worldwide to places of historical interest where he could study modern history and political and cultural trends. He never stopped learning. In 1988 he attended a short summer course at Cambridge University in England, where he studied World War II, Churchill, and British intelligence in breaking the German Enigma code. He was followed in death one week after his own by his constant companion and devoted wife of 72 years, Mary Waring Bue. He is survived by his son, Richard Charles Bue and his wife Rebecca, of Raleigh, North Carolina; two grandchildren, Virginia Bue and Campbell Bue of Raleigh, North Carolina; and his daughter, Kathryn Anne Bue, of Wiley, Texas. The family would like to thank Natalie, Chawncey, Gloria, Kayla, Rod and the many others with Christian Companions who lovingly cared for Carl and Mary in their later years. The family will gather for a Graveside Service at Geneva Public Cemetery at 10:30 a.m. on Saturday, February 13, 2021. A memorial service is to be held in Houston once Covid restrictions are lifted and will be announced when scheduled. In lieu of customary remembrances, the family requests with gratitude that memorial gifts be directed to the Judge Carl O. Bue, Jr. Endowed Presidential Scholarship in Law at The University of Texas School of Law. Farmer & Son Funeral Home was in care of the local arrangements. Online condolences can be left at www.farmerandsonfuneralhome.com

Carl Olaf Bue, Jr., a retired judge of the U.S. District Court in Houston, died peacefully at his home on Thursday, the 24th of December, 2020. He was 98 years of age. He was renowned throughout the legal community for his dignified judicial... View Obituary & Service Information

The family of Judge Carl O. Bue created this Life Tributes page to make it easy to share your memories.

Send flowers to the Bue family.