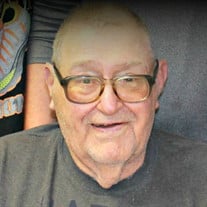 Carl Douglas Hamm was born to George Ellis Hamm and Lula Rozella Spangler on October 12, 1935, at Braddyville, Iowa. He passed away November 21, 2016, at his home in Fairmont, Nebraska at the age of 81 years, 1 month and 9 days. He was one of four children in the family. He was raised in Shamvaugh and Braddyville, Iowa until he joined the service in January of 1953. He was honorably discharged on January 31, 1956. Carl was married to Ellen Joyce Deardorff of Gothenburg, Nebraska on August 3, 1958 and to them four children were born. He and Joyce raised their family on a farm south of Norman, Nebraska. The family moved to Friend, Nebraska in 1980. They moved from Friend to Campbell, Nebraska where they resided until Joyce passed away in 1995. Carl then moved to Fairmont, Nebraska , then to North Loup, Nebraska and then returned to Fairmont where he remained until his passing. Carl enjoyed farming, fishing, friends and family. He especially loved his grandchildren. He was an avid gardener in his younger days, often spending hours in the garden. His greatest love was for his wife, Joyce. Our special thanks to Fairmont Senior Center and Fairview Manor where Carl spent most of his time in later years. He was a dear man who will be greatly missed. Carl was preceded in death by his parents, George and Lula Hamm; by his sister Judy Glasgow; his wife Joyce; two brothers-in-law, Craig and Gary Deardorff. He is survived by his daughters, Brenda Lee of Kentucky, Connie Jo Hylton and husband Kevin of McCook, Nebraska, and Penny Baker of Trenton, Nebraska; son Carl Rusty Hamm of Aurora, Nebraska; sister Nancy Martin and husband Pete of Iowa City, Iowa ; brother Merlin and Karen Hamm of Largo, Florida; sisters-in-law, Carla and Tom Kenton of Holdrege, Nebraska and Ronda Deardorff of Lincoln, Nebraska; brother-in-law Ron Deardorff of Lancaster, California; and numerous nieces and nephews and an abundance of wonderful friends. Also surviving are his nine grandchildren; Joshua Paul Underwood, Willie Ray Underwood, Chris Allan Hylton, Elizabeth Lundquist, Julie Terwilliger, Wayne Douglas Hamm, Allan James Scheerer Hamm, Jonathon Taylor Scheerer Hamm and Tori Marie Scheerer Hamm and 12 great grandchildren. Memorial services for Carl were held at the Farmer & Son Funeral Home in Geneva at 11:00 a.m., Tuesday, November 29, 2016 with Pastor Jeff Jensen officiating. Selected music was “I Can Only Imagine” and “You Raise Me Up”. Private committal of ashes was held at the Osco Cemetery, Minden, Nebraska. Online condolences may be left at www.farmerandsonfuneralhome.com.

Carl Douglas Hamm was born to George Ellis Hamm and Lula Rozella Spangler on October 12, 1935, at Braddyville, Iowa. He passed away November 21, 2016, at his home in Fairmont, Nebraska at the age of 81 years, 1 month and 9 days. He was one... View Obituary & Service Information

The family of Carl D. Hamm created this Life Tributes page to make it easy to share your memories.

Send flowers to the Hamm family.