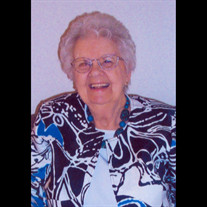 A Memorial Service for Carol was held at St. John's Lutheran Church in Ohiowa on June 14, 2019 at 10:30 a.m. A Graveside Service followed in the Bohemian National Cemetery, Milligan, Nebraska. Memorials are suggested to the St. John's Lutheran Church in Ohiowa or the Milligan Legion Auxiliary. Carol Catherine (Naber) Bernasek was born to Rudolph Naber and Clara (Heine) Naber on March 21, 1928 in York, Nebraska. She was the oldest of three children. God called her soul to Himself on April 16, 2019 at Bryan LGH West Memorial Hospital In Lincoln, Nebraska at the age of 91 years and 26 days. Carol was baptized on April 6, 1928 and confirmed on April 6, 1941 at St. John’s Evangelical Lutheran Church in Waco, Nebraska. Carol attended Waco Public School through the 3rd grade, St John’s Parochial School, 4th through 7th grade, and Waco Public School 8th through 12th grade, graduating in 1946. Following graduation, Carol attended Midwest Beauty Academy in Lincoln, Nebraska, attaining her license in 1947. She worked in both Lincoln and Fairbury as a beautician for several years. She later was employed by the Elgin Watch Factory in Lincoln, until her marriage to Ervin in 1958. Carol met Ervin Bernasek at a dance in 1958 and they were married at St. John’s Lutheran Church In Waco, Nebraska on October 4, 1958. To this union two children were born, Mark Joseph and Jacqueline Lori. Carol was actively involved with St. John’s Lutheran Church in Ohiowa, Nebraska. Activities included confirmation instruction and teaching Sunday school. Carol’s life centered around her faith and family. She always displayed a positive attitude, and every challenge was met with perseverance, patience, a sense of humor and prayer. Carol spent many hours tending her gardens. She enjoyed the planting, picking, canning and freezing of her produce. She was a wonderful cook as well. She was also involved with the butchering; however, this was a task that she did not particularly care for. Carol spent many hours sitting at the sewing machine making a good portion of clothes for her and for her family. She was also pretty handy with a hammer and chainsaw. Carol always had a “project” that she was working on, and she was not afraid to tackle something new! Carol also assisted Ervin with the farming operations. This included hauling grain, working with cattle, and just stepping in as Erv’s “right hand man”. This tapered off a bit when she became employed by the State of Nebraska in 1979 as a Youth Security Specialist. She worked there until her resignation due to failing eyesight, in 1989. A very bright spot in Carol’s life was her grandson, Ian. She thoroughly enjoyed spending time with him and babysitting whenever possible, until his move to Idaho in 1996. After Ervin’s passing in 1999, she moved to Lincoln due to failing eyesight. She remained in Lincoln until her death. While living in Lincoln, Carol was a member of Grace Lutheran Church where she was involved with the Ladies Aid. She found great reward in being part of the “Prayer Chain”. Even though Carol was unable to drive for the last 30 years, she did not let that stop her from enjoying and contributing to life. What a beautiful spirit she had! We will miss her, but we will see her again! Carol was preceded in death by her parents, Rudolph John Naber and Clara Anna Louise (Heine) Naber; husband, Ervin; son, Mark; and sisters, Marilyn Morden and Doris Ann Naber. Surviving and mourning her loss while rejoicing in her gain are daughter, Jacqueline and husband James Taylor of Meridian, Idaho; grandson, Ian Kluck of Meridian, Idaho; and nephew, John Morden and family of Lincoln, Nebraska.

A Memorial Service for Carol was held at St. John's Lutheran Church in Ohiowa on June 14, 2019 at 10:30 a.m. A Graveside Service followed in the Bohemian National Cemetery, Milligan, Nebraska. Memorials are suggested to the St. John's Lutheran... View Obituary & Service Information

The family of Carol C. Bernasek created this Life Tributes page to make it easy to share your memories.

A Memorial Service for Carol was held at St. John&#39;s Lutheran...

Send flowers to the Bernasek family.